How to catch golden perch

Golden perch can turn up when fishing for Murray cod but are better targeted with certain techniques and in particular spots. Golden perch, or yellas as they’re known, respond well to baits and lures. Their preferred habitat in the Grampians can vary but they’ll usually be found near structure such as submerged logs, rock walls or standing timber. They have a habit of positioning themselves amongst trees in mid-water. For instance, the total water depth is 12 metres and they’re sitting at five metres. A good sounder and knowing how to use it is a big advantage for finding yellas in mid-water. Redfin and trout are a common bycatch when chasing yellas in lakes. Golden perch tend to school up together, particularly in lakes during springtime. Try trolling small, bibbed crankbaits/deep divers, lipless crankbaits and even soft plastic lures at depths between two to 10 metres around the shoreline. Trolling is better conducted on open banks with less timber or in areas where there’s large dead timber standing vertically in the water. The downside to trolling is getting hung up or snagged. A balance must be struck between fishing a likely zone and not getting snagged all the time! Once a few yellas are found, troll over the same area again or tie up/anchor and cast lures towards the last known capture position. There’s nearly always more than one!

On a cast lure, yellas are great fun because they strike lures vigorously when in the mood. From a boat, target them by slowly moving along a shoreline casting towards the bank. Lipless crankbaits and deep diving hard body lures are ideal choices. Casts should be fanned towards the bank to cover water comprehensively. Another successful boat-based method is taking up stationary position above fish in the trees and dropping lures down to them. This vertical approach relies upon moving every 20 minutes or using a sounder to find the schools in the first place. Small black soft plastic grub tail lures are a deadly option in these circumstances. Tie up to a tree. Drop the lure to the bottom and wind it up slowly next to the main trunk of the tree. The key is a slow retrieve. With modern sounders on the bow of sportfishing boats, yellas can be seen following black grubs on the screen, enabling fishers to really stay in the strike zone and present lures with finesse. 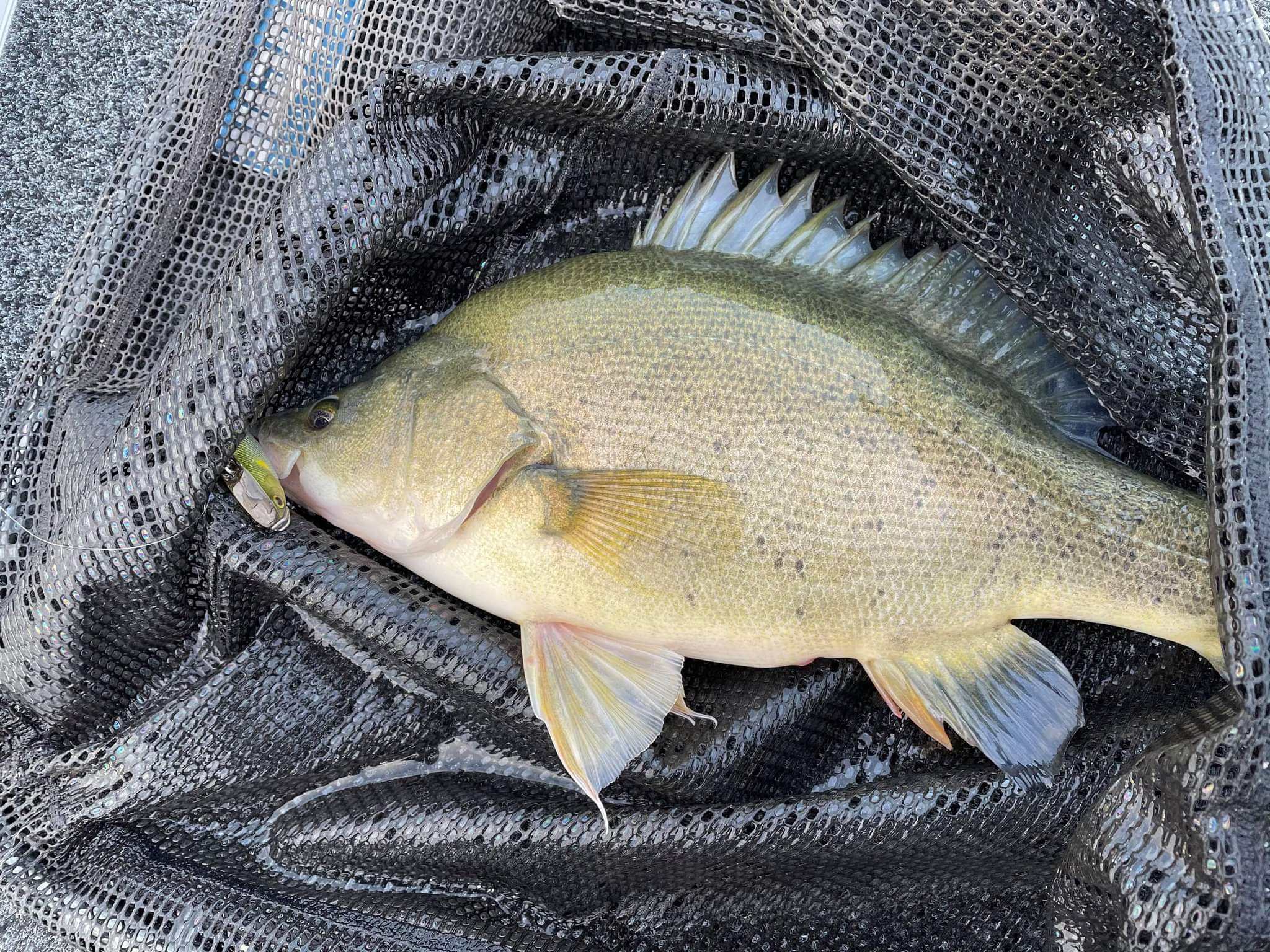 Natural baits are great for yellas in lakes: earth worms, small yabbies, peeled yabby tails, freshwater shrimp, and even bass yabbies work well. With starting out chasing yellas with bait, it pays to use rigs that keep your bait in the same position to avoid getting snagged too much. A running sinker or a paternoster/dropper rig both work well and a size #1 hook is ideal. Move often if you don’t get a bite and fish the same areas as lure casters. Don’t be afraid to pull the boat up on the shore and cast back out into shallow water. Sometimes yellas are in only a few feet of water, especially if the lake is filling and new ground is being covered. They love to forage in the newly covered ground for tucker!

Shore based fishing for yellas can be highly effective. Prospecting the bank with a spin rod is a great way to actively target these fish, which can be surprisingly close to the shore, especially at dawn and dusk. Lure casting with floating hard bodies is a good option, as are spinnerbaits that snag less than lipless crankbaits. The ‘cast and move’ approach is a good one. Put in five or ten casts in one spot then move along the bank and repeat. You’ll be covering lots of water and have a better chance at finding a hungry yella. Longer rods will help cast further to cover more water, so a 7-7.5-foot medium actioned rod with a 2500 sized reel, 3kg braided line and 3 or 4kg leader of about 6 foot are perfect. Bait fishers can use the same tackle, just add in a good rod holder to anchor things down. Golden perch can be caught right throughout the day, but in hot weather they’re better targeted in early morning and evening, particularly from the shore.