A monitoring program is expected to recommence at Venus Bay this summer to monitor the status of naturally occurring shellfish biotoxins in pipis. Naturally occurring toxins have been known to accumulate in some shellfish when they ingest toxin-producing algae. It can cause illness in people who eat affected shellfish.

The VFA advises that testing has previously indicated that pipis collected from Venus Bay have been safe to eat. However, as toxins can accumulate in shellfish anytime, please consider health risks before you or your friends harvest and consume pipis outside of the monitoring program. For more information about Toxins in Venus Bay pipis please click here.

Please continue to review this web page for further updates of testing outcomes over the coming months.

For information on the Commercial Pipi Fishery, click here. 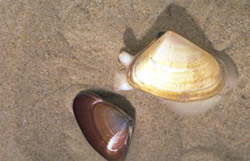 In Victoria, recreational pipi collecting is enjoyed by many people who, using their hands and feet, search out these shellfish from the beach sand. Recreational fishers enjoyed an abundant supply of pipis at Venus Bay over the summers of 2008/2009 and 2010/11.

Because of the pipi's increasing popularity, The Victorian Fisheries Authority reduced the daily catch limit for pipis at Venus Bay and undertook a scientific study to find out more about: 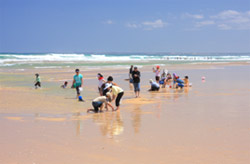 The pipi is an edible bivalve mollusc that lives in the intertidal and subtidal surf zones of high-energy beaches throughout south eastern Australia.

At Venus Bay pipis are:

The distribution of pipis at Venus Bay is characteristic of pipi populations generally and similar to those found in South Australia and New South Wales. Pipis from Venus Bay are mostly collected for food

At Venus Bay, the study found the typical pipi collector to be:

Collecting pipis is a summer activity at Venus Bay, peaking in January.

Collecting takes place at five locations near the Venus Bay township (see map below). Beach access was the principal factor in determining where pipis were harvested. Most people collected pipis in the area close to their point of arrival at the beach:

Very few people collected pipis from all five beaches. The presence of better access at Beaches 1 and 5 appear to be influencing where people choose to go searching for pipis. Pipi collecting is highest near points of beach access 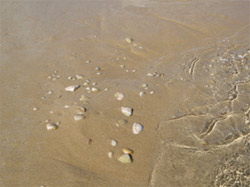 People collecting pipis for food chose shells of all sizes, while those collecting for bait prefer the larger pipis

At Venus Bay, collecting pipis is a group activity, with over 65% of people on the beach in groups of two or more. Groups consisted of 3.15 people on average.
Pipi collectors at Venus Bay typically:

The efficiency of pipi collectors at Venus Bay was variable, ranging between 0.01 and 1.33 litres of pipis per person per half hour.

Pipi collectors showed a high degree of compliance with the catch limits set for pipis collected inside the Cape Liptrap Coastal Park (2 litres per person per day).

The impacts of collecting pipis on the stock at Venus Bay Beaches 1, 3 and 5 were examined and compared with a control site which has experienced very little harvesting.

The recreational collection of pipis over a number of seasons had:

Similar harvest effects have been described for pipi populations in New South Wales, South Australia and in other surf clam fisheries overseas.

Implications for the management of pipis in Venus Bay Harvesting pipis has had no measurable impact on the numbers of pipis on the Venus Bay beaches.

The research found the pipi harvest at Venus Bay is:

This is good news for the sustainability of pipi populations in Venus Bay in the long term because harvesting is contained and well controlled.

The research indicates there is no need to further tighten the regulations relating to the collection of pipis.

The daily catch limit for pipis in Venus Bay (in the Cape Liptrap Coastal Park between Point Smythe and Arch Rock) are:

Pipis can only be taken by hand, and equipment such as rakes, spades and nets cannot be used. Unless exempt, a Recreational Fishing Licence is required to collect pipis from Victorian Beaches. At all other Victorian beaches the daily catch for pipis is 5 litres per person or 1 litre of shucked pipi meat per person. 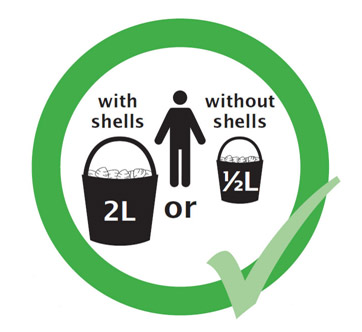 To ensure Victorians can have their pipi and eat it too, scientists from the University of Melbourne are using fishing licence fees to learn more about pipis at Venus Bay.

Over the past 12 months there has been close to 3000 pipis sampled to assist gain a better understanding of size distribution and abundance. Total numbers of pipis have increased across the year with the most abundant areas of large mature pipis found a short walk from the main beach access points.

Additional studies have been undertaken to better understand the movement patterns of pipis at Venus Bay. In January 2017, 2000 pipis were tagged and released at Beach 1. There has been approximately 100 reported recaptures over the following 12 months, with most confined to the area of release around Beach 1. These results suggest that adult pipis do not move very far, although there was one recapture report from near Beach 3, potentially the biggest movement reported to date (1km to the NW). Fishers are encouraged to explore areas beyond the immediate beach access points to have the greatest success in locating good sized pipis and to spread the harvesting effort on adult pipi populations.

For more information on pipi: