Fishers who sell or attempt to sell their catch without a commercial licence is illegal. This unlawful activity impacts the sustainability of our fisheries resource. This is a major concern/problem in Victoria.

Is it illegal to sell my recreationally caught fish?

Yes. Selling fish without a legitimate commercial licence to do so is illegal. As a recreational angler, you must not:

Why is it important for anglers not to sell their catch?

Selling recreationally caught fish undermines the legitimate commercial fishing sector and our shared fisheries resource. It affects fish stocks and threatens the sustainability of our fisheries and the livelihoods of licensed commercial operators.

Illegal seafood networks negatively influence the availability and price of seafood for customers as well as increasing our consumer health risks.

When you are caught, the fisher and buyer could face significant fines, seizure of property associated with the offending and receive potential jail terms. What species are most commonly involved?

Fish commonly associated (in high demand), in the illegal take for sale include:

What happens if you're caught selling fish without a commercial licence?

Individuals found selling their catch could: 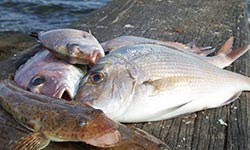 What happens to the buyer?

Who do I contact if I suspect 'illegal take for sale' activity?