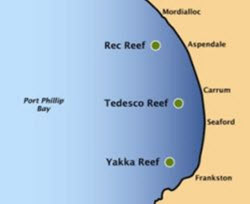 The three reefs were deployed in a water depth of 11 metres, approximately 2 kilometres out from Aspendale, Seaford and Frankston. A public naming competition was held during Easter 2009.

The reef at Aspendale is named Rec Reef to highlight the use of these reefs to improve recreational fishing.

The reef at Seaford is named Tedesco Reef after Neil Tedesco who died in a diving accident in 2009, age 31. Neil was a devoted fisher and diver and an ambassador of these sports.

The reef at Frankston is named Yakka Reef after the growing popularity of kayak fishing and the reefs accessibility to small craft.

A Fisheries Notice excludes commercial fishing around the three reefs.

This video describes the deployment of the three recreational reefs in Port Phillip Bay in 2009, as well as the evaluation of their performance and ecological impacts over a 3 year period. Each reef is comprised of approximately 100 concrete modules called “reef balls".

View the transcript for this video.

What was the outcome of the trial?

Following their deployment, the three reefs were the focus of a rigorous three-year scientific monitoring trial. This involved regular dive surveys, the use of baited underwater video cameras, fishing trials using expert anglers and surveys of anglers at boat ramps.

The three reefs were rapidly colonised by a range of marine plants and animals along with a variety of fish including many popular with anglers. Snapper was one of the most common fish detected.

Anglers surveyed as part of the trial were satisfied with their fishing experience on the new reefs and indicated they would return to fish the reefs.

The reef structures have proven resilient to sedimentation and disturbance by anchoring and are expected to provide fishing opportunities for years to come.