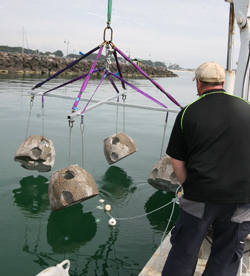 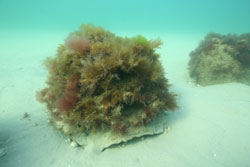 Building on the success of the recreational fishing reefs deployed in 2009 for boat-based anglers in Port Phillip Bay, the Victorian Fisheries Authority deployed a further three reefs for shore-based anglers in 2012.

The reefs are in a water depth of between 3-4.5 metres;

These locations were chosen based on their environmental and physical attributes and following consultation with angling representatives and other government agencies.

Each reef consists of 99 hollow dome shaped reef modules of different sizes arranged in three reef complexes of 33 reef modules each. The reef modules range between 170 and 340 kg in weight and 50 to 60 cm height and have numerous external openings to allow movement of currents and fish through the modules.

The reefs also provide habitat for a range of other plant and animal species, increasing local biodiversity.

Fisheries scientists evaluated the performance of these reefs over a two year period, concluding that the reefs have increased marine diversity in the area. The evaluation program monitored:

A copy of the evaluation report for these shore-based reefs is available by emailing improving.fishing@vfa.vic.gov.au

This video shows the development of the Frankston Pier artificial reef. The reef is made of approximately 100 concrete modules that were deployed about 40-50 m off the end of Frankston Pier in November 2012. The video is taken by a baited under water video (i.e. a remote video camera with a bait cage) which is used to monitor the development of the fish communities on the reef over time. The video shows how the reef community develops from bare sand with few fish prior to reef deployment to algal covered reef modules with abundant fish life as such juvenile snapper and leather jackets, and also calamari squid one year after deployment.

Please note there is no sound in this video.