Three new rocky fishing reefs were built in and around Corio Bay in 2021 to give more fishers access to some of Victoria's bread and butter species like King George whiting, snapper and calamari.

The new reefs are part of the State Government's $35 million plan to get more people fishing, more often and complement  the removal of commercial net fishing from Corio Bay in 2018.

To provide more homes for fish, $2.5 million is being invested to install several varieties of reef in Port Phillip.

The trio of reefs were constructed with 2,000 tonnes of basalt as a base, sourced from the nearby Cherry Creek juvenile justice facility with help from VRFish and topped with 100 tonnes of limestone. This combination provided the perfect substrate upon which to seed 400,000 native flat oysters and 10 tonnes of blue mussels.

Oysters were sourced from the Victorian Shellfish Hatchery at Queenscliff and the mussels came from a local grower, Advanced Mussel Supply. Oysters and mussels will improve water quality, create diversity in sea floor fish habitats and boost productivity for fish and invertebrates. The reefs are situated at three locations around Corio Bay and the Geelong Arm of Port Phillip at Outer Harbour, Kirk Point and St Helens.

The Outer Harbour reef is called Moolap, that being the Indigenous name of Point Henry. Moolap recognises the cultural significance of the sea country to Wadawurrung people and means a place of men fishing with spears.

The reef at St Helens is Merv’s Reef, named after the late Merv McGuire, former head of Future Fish and VRFish. It is ideal for land-based fishers because it’s 62 metres from the break wall. That is not so close as to be an unwelcome snag, but close enough to pull fish from with a good cast. 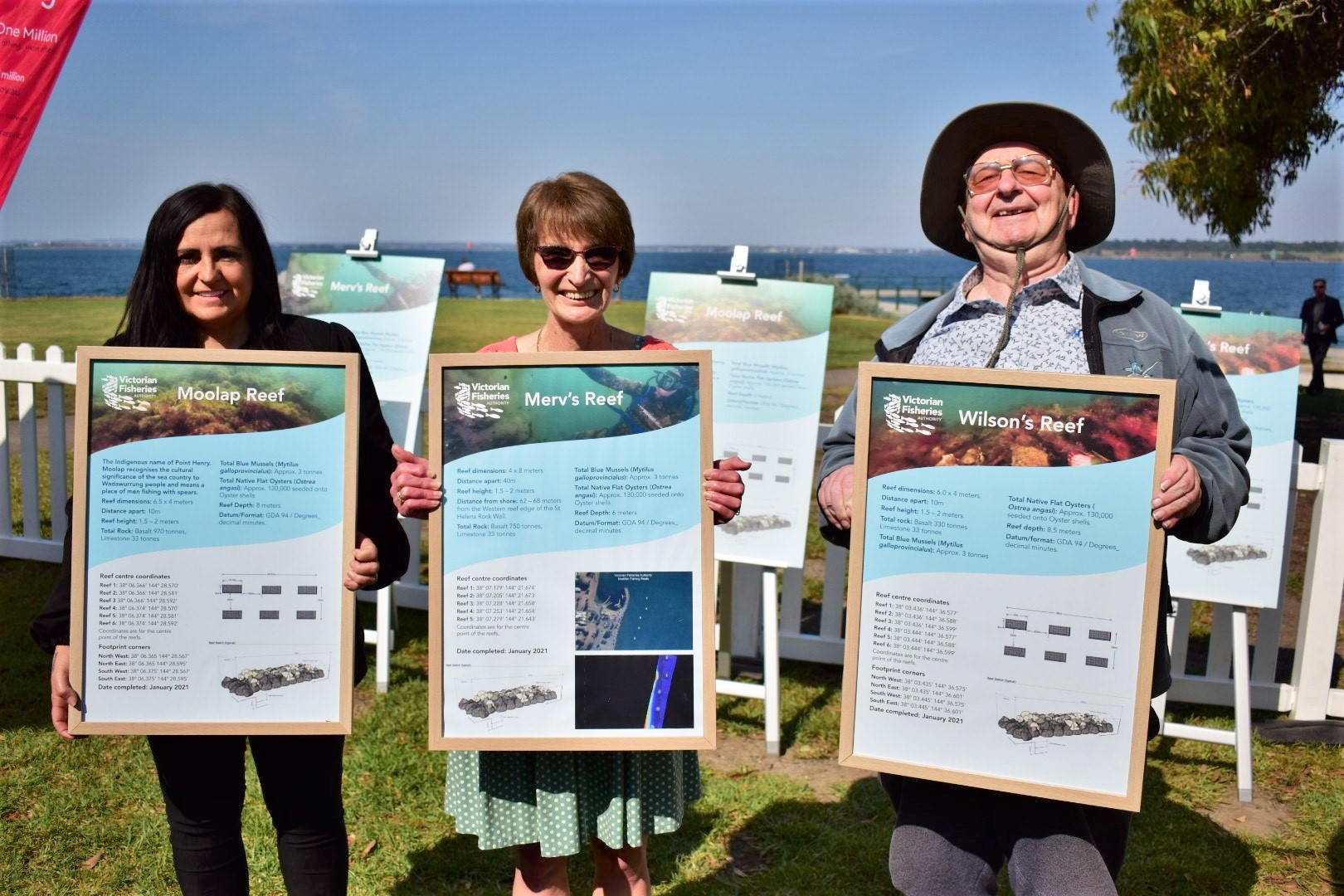 Reef locations were selected following consultation with key recreational fishing stakeholders and Geelong fishing club members. The new reefs are accessible, known for good fishing and away from areas important for other marine uses, such as shipping channels and spoil grounds.

Coordinates for the reefs are:

What are rocky reefs? The rocky reefs complement the removal of commercial net fishing from Corio Bay in 2018.

Along with these Corio Bay reefs, a second project, worth $1.1 million, was led by The Nature Conservancy with $500,000 from Go Fishing Victoria. It has restored shellfish reefs at 9ft Bank in the Geelong Arm by deploying 100 cubic metres of recycled shells from restaurants and the seafood industry. The project also included new reefs at Wilson Spit in Geelong Arm, Margaret’s Reef near St Kilda and in Dromana Bay. These 3.5 hectares of new reefs were seeded with approximately 3 million oysters and 6 tonnes of blue mussels, which will attract a diversity of fish and aquatic life.