The Basin extends from high altitude (1,200 m) forested mountains in the Great Dividing Range to the Murray River at Lake Mulwala. Almost two thirds of the Basin (south of Wangaratta) has steep mountains and hills and most of this is covered with forests. The main rivers (Ovens, Buffalo, Buckland and King) flow in wide valleys of cleared farmland.

Mean annual rainfall exceeds 1,400 mm in the mountains in the Great Dividing Range but decreases to 500-600 mm nearer the Murray River.
Water quality is generally good throughout the Basin with fresh water (< 300 EC), low levels of nutrients, turbidity, colour and bacteria levels in most rivers, except in the lower reaches of the Ovens River.

The high rainfall and granitic rocks in the mountains result in clear, fast- flowing, clear- water-rivers, with coarse substrates in their upper and middle reaches. These support good self-sustaining populations of blackfish and brown trout. Access to almost all rivers is excellent for conventional vehicles with good fishing possible without extensive walking. All the best fishing is in rivers with the exception of Lake Mulwala (often called Yarrawonga Weir), which provides excellent fishing for Murray cod and golden perch. There are two reservoirs, Lake Buffalo on the Buffalo River and Lake William Hovell on the King River.

All rivers in this Basin have had at least a decade of below average flows resulting from drought conditions. In addition, the King, Buffalo, Rose and Dandongadale river catchments were burnt out by bushfires in 2006/07. The extended drought and bushfires have affected instream habitat, resulting in loss of some biota. However experience has shown that river structure and instream habitat recover quickly, once flow regimes return to normal.

Buffalo and Mulwala lakes and William Hovell Reservoir were at full capacity early 2009. 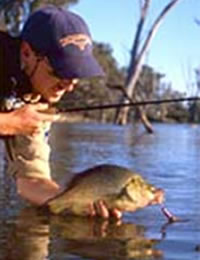 See Introduction for information on management agencies and programs.

- is responsible for catchment management and the Victorian River Health Program.

The Ovens River from Killawarra to Lake Mulwala.

Species in bold type and the Lowland Riverine Fish Community of the Southern Murray-Darling Basin are also listed under the Flora and Fauna Guarantee Act 1988. ) and cannot be taken or kept without an order, licence or permit. Such an order by the Governor in Council allows anglers to take Murray cod and Murray spiny crayfish.