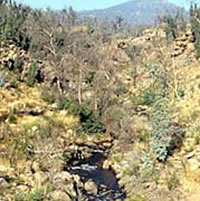 Rises in forested mountains then flows through steep farmland, rubble and sand with some rock and boulder substrate. Mean width is 9 m, with riffles 50 cm deep and pools to 200 cm. Riparian vegetation in the farmland is mainly blackberry. There is abundant fish cover from the undercut banks and instream rock substrate. Carries brown trout to 1.5 kg (av.350 g), a few rainbow trout av. 300 g and blackfish to 170 g. The farmland in the lower reaches is accessible by road from Anglers Rest. Good for fly-fishing. Self-sustaining trout population and not stocked. Habitat improvement work under the River Health Program includes removal of willows and English broom, revegetation and fencing along the banks.

Flows through forested mountains, gravel bed. Access upstream is difficult, requiring a 4WD vehicle or walking from Anglers Rest. Can also be accessed through private property off the Alpine Road. Please ask permission to enter. Carries abundant brown trout to 1.2 kg, some rainbow trout to 200 g, and numerous blackfish to 80 g. Recognised as an excellent trout water, good for fly fishing and a pleasant environment. Self-sustaining trout population and not stocked. The River Health Program includes removal of willows and English broom, revegetation and fencing along the banks.

A very large, deep, steep-sided, water storage extending 40 km from the retaining wall back to its furthest point up the Mitta Mitta River. It is the tallest earth and rockfill dam in the Southern Hemisphere (183 m high).

The lake is surrounded by steep forested mountains. Main access is via Dartmouth village to the dam wall or to Six-Mile Creek where there is a boat ramp and full picnic facilities. There are several good camping sites around the lake, most only accessible by boat (Eight Mile Creek, camping and toilets; Raymond Creek Dart Arm, no facilities; and Eustace Gap, no facilities- accessible by boat or a track).

There is some 4WD access to the top of the lake but this requires local knowledge. Bank fishing is available near the boat ramp. Contains brown trout to 1.5 kg, rainbow trout to 1 kg, European carp, blackfish, Macquarie perch, trout cod (moved into the lake from stocking upstream in the river), eastern gambusia and goldfish. Department surveys (1998-2001) found that brown trout were the most common species caught by anglers (80%) followed by rainbow trout (19%). Most trout are caught by trolling. During the warmer months (after late December), trout move into deeper water (4-10 m). It is then necessary to get baits and lures down into the cooler, deeper water to catch trout. Live baits such as mudeyes and worms are also very successful.

Brown trout and rainbow trout to 1.5 kg are also taken along the edges of the submerged timber in the early morning. Macquarie perch can be taken from this lake but there is a bag limit of only one fish. The lake provides angling during periods of low water level. The lake was at 23% capacity in early 2009.

A small creek flowing through forest and farmland, gravel bed. Carries some small brown trout to 700 g at times and provides limited angling for locals. Not stocked.

The lower reaches have been inundated by Lake Dartmouth and are more accessible by boat because of the steep valley in which the river flows. Self-sustaining trout population and not stocked.

Surrounded by cleared land and farmland. Good access to the lake with concrete boat ramps at the spillway and at Ludlows Reserve, Huon Reserve and Tallangatta on the southern shore in Victoria. There is still access for boats until water capacity falls below 10%. The lake is now all Victorian water and a Victorian Recreational Fishing Licence is required.

Predominant angling species are redfin to 1.6 kg, brown trout to 2.5 kg, European carp to 5.2 kg, and golden perch to 4 kg. An occasional Murray cod to 15 kg and silver perch are taken. Best fishing period for brown trout is September to November with most trout caught by trolling. Lures should be trolled at a fast 'walking pace' speed. Bait fishing from the bank will result in a good catch of European carp and often little else.

Golden perch are most active November to January and best catches are made trolling in shallow water up to 6 m deep. Yabbies and worms are good baits and golden perch can be taken from the banks provided European carp dont get the bait first. Techniques for trolling for native fish are the same as mentioned in the section on fishing the Murray River, i.e. fish near snags or rough bottom if possible, and troll at a relatively fast speed. Early summer is the best time to try for Murray cod but very few fish appear to have been caught by anglers.

Redfin move in shoals in the lake and trolling is a good way to locate a school. Anglers have had good success trolling at depths of 5-10 m. Best fishing times are November through to April/May. Some anglers report that catches of redfin have declined during 2008 with most fish being small. Others report them still present but that catches are erratic.

Lake Hume has a variety of species and all species will seldom be available to anglers at any one time. Best fishing results come from targeting a particular species, understanding its habitat and water requirements; and learning the best way to catch that fish. Note that all except trout are warm-water fish species normally occurring in waters with summer water temperatures reaching 20o C. Releases cold water (temperature range 7-16o C) from the lower level of lake Dartmouth into Lake Hume, which significantly affects the movements and behaviour of fish such as redfin, Murray cod and golden perch, at these times.

A 3-year study on fish and anglers catches, commenced in 2005. Results up to 2006 indicate that fish caught in order of abundance were European carp, redfin, golden perch, brown trout, goldfish and Murray cod.

Stocked with golden perch each year. Stocked annually with brown and rainbow trout since 2006. Stocked 2007/08 with Murray cod translocated from Lake Mokoan.

A wide (10 m) shallow creek rising in forest and flowing through farmland and Omeo, gravel bed. The headwaters have some good trout water but access is difficult.

The lower reaches around Omeo have some sedimentation and further downstream the creek becomes a series of pools during summer. Contains good numbers of small brown trout to 500 g, with larger trout around Omeo. Not stocked because of difficult access upstream and poor habitat downstream and sufficient natural recruitment to support the recreational fishery. River Health Program includes removal of willows and English broom, revegetation and fencing along the banks.

Rises in forested mountains on the edge of the Alpine National Park east of Falls Creek as Big River. Flows south-east, then north for 70 km to Lake Dartmouth. From Lake Dartmouth, flows 20 km to the town of Mitta Mitta. From here it flows north for 50 km to Lake Hume.

Flows in forested mountains. Average river width at Glen Valley is 18 m increasing to 28 m near Lake Dartmouth. Substrate is rock, boulders and rubble with a high percentage of sand. Water consists of riffles and rapids with pools 1.5 to 3 m deep at various locations.

A department survey in 1993 found small numbers of brown trout av. 400 g, abundant blackfish and numerous Macquarie perch in this section of the river. There is good access downstream of Glen Valley for 20 km but the river then flows in a steep, forested valley with a limited number of 4WD tracks to the river. In 1992/93, 10,000 trout cod fingerlings were stocked in the river upstream of Lake Dartmouth. Occasional trout cod have been recaptured in the lake. The alpine spiny crayfish (Euastacus crassus) may occur in the headwaters.

Trout cod were again stocked into the upper Mitta Mitta River in 2002/03 as part of the National Trout Cod Recovery Program.

The river flows for several kilometres from Lake Dartmouth into a regulating pondage (Banimboola Lake) and then approximately 18 km to Mitta Mitta township. It flows in a forested gorge, with rapids and cascades immediately below the pondage, then through farmland near the Mitta Mitta township. Channel width is 22-46 m with predominantly pools 2-6 m deep (riffles make up only 20% of this reach of the river).

The substrate is sand and rubble, with some patches of bedrock and gravel. In 1993 a survey by the department found that this section contained mostly brown trout averaging from 73 g to 1.2 kg in different locations, with the largest fish downstream of the dam wall to the pondage. The largest number of trout was at Colemans (about 2.5 km downstream of Banimboola Creek). Other species present were a few rainbow trout, a few small redfin, some European carp, climbing galaxias and Murray spiny crayfish. This section is very accessible by car although some walking is required to reach the river in the gorge area.

This is one of the better waters for brown trout in NE Victoria.

The department survey in 1993 found that the section of river from upstream of Scrubby Creek down to Spring Creek carried the largest number of trout. Access is excellent along the river and it is popular with fly fishermen. The department studies also found that the principal diet of brown trout in this section of the river is mayfly nymphs Coloburiscoides sp; stonefly nymphs Dinotoperta sp and larvae of the sandfly or black fly Austrosimulium sp.

Flow in the Mitta Mitta River downstream of Dartmouth Lake is controlled by water released from the lake. An environmental flow is always present. However in most summers, extra water is released from Lake Dartmouth into Lake Hume to meet irrigation demands further downstream in the Murray system. The river then rises close to bank-full with flows of 10,000 to 16,000 ML/d and water temperatures fall to less than 10o C. Water velocity is high and wading is impossible. The river used to contain self-sustaining populations of Macquarie perch, trout cod and Murray cod. Warmer river water, resulting from changed management of the system during the past decade of drought, has resulted in the return of Murray cod to the lower Mitta Mitta River. Anglers report numbers of Murray cod have been taken during the past 5 years. Stocked with Murray cod in 2008 and to be regularly stocked.

Contains a self-sustaining population of trout and is not stocked with trout.

Twelve sites between Dartmouth Dam and Lake Hume are receiving river improvement work under the River Health Program. This includes revegetation of the river banks and fencing to exclude stock.

Dry in most years and used as grazing land.

Flows through forest and farmland, sand and gravel bed. Flow is low and water is warm during summer. May receive fish from Lake Hume. Contains some brown trout. Not stocked.

2 ha.
Surrounded by forest and farmland. Not considered an angling water and not stocked since 1973.

Flows through farmland, gravel and rock substrate. Riparian vegetation of grass and willows with some bank erosion and sedimentation in the lower reaches. Contains brown trout to 2 kg (av.125 g), some rainbow trout to 275 g, small redfin, blackfish, and Australian smelt. Larger trout are present in April-June when trout run-up from Lake Hume to spawn in the creek. A tributary (Bucheen Creek) also contains brown trout and blackfish. A department survey in 2005 found an adequate remnant population of brown trout in the upper reaches. Access is limited to road crossings. Not stocked.