Not on the map but located on the east branch of the Kiewa River approximately 2 km downstream of Lake Guy. It is a small pondage reservoir for the Kiewa hydroelectric scheme, surrounded by steep forested country. Contains brown trout to 2 kg and is not stocked. 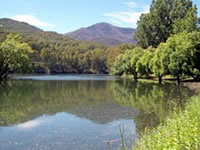 Also known as Junction Dam, this stores water as part of the hydroelectric scheme. It is picturesquely set in steep, bush-clad mountains adjacent to Bogong Village and contains brown trout to 2.5 kg. It is not stocked because of the ample spawning which takes place upstream.

The section of the Kiewa River between Mount Beauty Pondage and its confluence with the Murray River above Wodonga has been designated as a Premier River under the Go Fishing in Victoria initiative. The upper section between Mount Beauty and Dederang is highly regarded for its trout fishing and the lower section through to Wodonga provides many opportunities for anglers wishing to fish for Murray cod.

The East Branch rises near Falls Creek and has a large reservoir (Rocky Valley Storage) on its headwaters and several smaller dams downstream (Pretty Valley Pondage, then Lake Guy or Junction Dam then Clover Dam). It is the smaller of the tributaries and contributes only a small flow into the main channel of the Kiewa River downstream of Mount Beauty township.

Flows in a steep forested valley with access only from several tracks. Width is around 10 m with riffles 20-30 cm deep, boulder rubble and sand substrate. Contains brown trout, rainbow trout, redfin and blackfish. Not recommended for angling. De-silting of dams has left large quantities of silt in the stream. Take care if wading the stream because of this 'quicksand'.

The river flows for 60 km through forested mountains with much of its middle and upper reaches accessible only by 4WD tracks. The river upstream of the diversion point into the power station is a wide un-regulated river with rapids and cascades. Rubble, rock and boulder substrate. The catchment in this section of the river was burnt in the 2006/07 bush fires. However the river still contains a good fish population.

The river downstream of the diversion portal is predominantly riffles 40 cm deep with pools to 65 cm deep. However the river becomes only 2-5 m wide when water is being diverted.
At Mount Beauty township there is a short section of the West Kiewa River flowing through the town with some good pools to 100 cm deep. The river carries brown trout and rainbow trout 220-700 g, mountain galaxias and blackfish. The alpine spiny crayfish (Euastacus crassus) may occur in the headwaters.

Although there is a main road running up the Kiewa Valley, the river usually flows a considerable distance away from the road. Access is therefore restricted to a number of cross road. Anglers are advised to use these public access points and only cross private farmland after obtaining permission from the landholder.

A good flow is maintained downstream of the Pondage with minimum releases of 60 ML/d or at the natural flow level if this is less than 60 ML/d. At times higher flows can occur. The river flows in flat farmland with a rubble and gravel, then sand substrate. Riparian vegetation is largely exotic species such as willows with more native trees in the lower reaches. There is some bank erosion.

The 30 km section between Mt. Beauty and Gundowring is least affected by sedimentation, contains good trout stocks and is the most popular trout fishing area. Access to this area can be reached at Mount Beauty Pondage, Mountain Creek Road, Red Bank Road and Gundowring Road. Here the river is 13-20 m wide with riffles 20 cm deep, runs 50-70 cm deep and extensive pools 70-100 cm deep; during normal (60-100 ML/d) flow conditions. Periods of heavy rain (2007/08) after the bush fires, resulted in increased turbidity in the river which adversely affected fish. However 2009 surveys by the department indicate healthy populations with full range of year classes.

This section contains abundant brown trout to 1.5 kg, some rainbow trout to 450 g, two species of blackfish, European carp, redfin, mountain galaxias and Murray spiny crayfish. Large numbers of brown trout with heaviest fish varying from 700 g to 1.5 kg (av.1 kg). This is a popular water for spinning and fly-fishing for trout. The good population of large-sized trout are due to abundant spawning habitat, good areas of water 45-100 cm deep, coarse substrate for food production and cool water released from the Mt. Beauty Pondage. No trout stocking occurs because of a self-sustaining trout population. 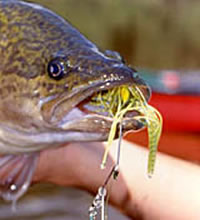 The lower reaches downstream of Dederang contain a natural self-sustaining population of Murray cod which has been supplemented by occasional stocking of Murray cod (2003 & 2004). Stocking of Murray cod recommenced in 2009. Access to this area is also limited to a few cross roads. The Kiewa River and tributaries upstream of Keegan's Bridge (Dederang) are closed to all hook and line fishing during the salmonid closed season (from midnight on the Monday of the Queens Birthday long weekend in June until midnight on the first Friday in August).

The River Health Program has identified the Kiewa River as high priority for a permanent environmental flow. This will be negotiated as part of the Stream Flow Management Plan currently being developed. A major continuing project is the removal of seeding black willow trees from the river and floodplain, revegetation, fencing and bank stabilisation along extensive lengths of river, at two sites, downstream of Gundowing.

Several other activities are part of the Murray-Darling Basin Native Fish Strategy and are specifically designed to rehabilitate instream habitat. These are removal of undesirable bank vegetation, erosion control and revegetation. In addition, the ecological condition and health of the Kiewa River valley has been assessed at a number of sites for the Sustainable Rivers Audit (SRA). This program (initiated by the Murray-Darling Basin Commission) is designed to measure the health of river valleys in the Murray Darling Basin. The objective is to determine areas in the river valley needing attention and protection. The Avoca, Goulburn, Kiewa, Ovens, Campaspe and Wimmera river valleys have also been assessed as part of the SRA program. See the Introduction in the Guide for additional information.

Following improvements along the river a detailed information package which provides information on angler access, fish species and angling techniques for this section of the Kiewa River will be available in 2010 as part of the Go Fishing in Victoria initiative. Visit www.depi.vic.gov.au/gofishing

An important spawning and nursery creek for trout from the Kiewa River. Flows in Crown Land with some sedimentation in its lower reaches. Contains mostly rainbow trout to 220 g, some brown trout and blackfish.

A regulating basin for the hydroelectric scheme and located on the outskirts of the town. Access is via Lakeside Ave or Embankment Drive. Water level fluctuates regularly because its function is to absorb the power generation surges from upstream and provide an even flow downstream.

There are extreme fluctuations in water level in the Pondage from November to February but during March to May there are consistently low water levels. Contains redfin, brown trout to 2.5 kg and rainbow trout and has become a very popular fishery. Best bank fishing is along the wall. Extensive weed growth up to 1 m deep provides cover for fish.

Baits such as mudeyes, presented under a float, which keeps them free of the weed beds, take good-sized trout. Stocked regularly with brown trout and rainbow trout.

Has a low summer flow which results in small-sized trout. Covered by snow during winter. The upper reaches (Cope Creek) flow into Pretty Valley Pondage and this is an important spawning creek for fish from Pretty Valley Pondage. Abundant brown trout to 350 g (av.30 g) and mountain galaxias. Trout are too small for most anglers.

A storage for the Kiewa hydroelectric scheme (and also acts as a settling basin for silt) located on the East Branch of the Kiewa River in the Bogong High Plains. Receives water from the Rocky Valley Storage via a diversion tunnel. Wide fluctuations in water level. Covered in ice and snow in winter but is fished at other times of the year. Contains brown trout to 1.4 kg (av.500 g), with abundant small trout in the adjoining streams. Not stocked. 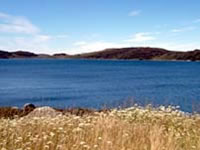 Located above the snow line, and is the main storage of the hydroelectric scheme. It is surrounded by snow grass plains and freezes over in severe winters. Access is from a good unsealed road around three sides but which is usually impassable in winter.

Water level fluctuates and there is little aquatic vegetation. Contains brown trout to 1 kg, but predominantly small fish (av.300 g) and the occasional rainbow trout to 300 g. (Rainbow trout cannot spawn successfully because of snow and ice still present during their spawning time in early spring). Trout stocking was discontinued after 1987, when it was shown that abundant brown trout spawning occurred in the inflowing streams and aqueducts.

Located in Belvair Park on the northern fringe of the town at the junction of the Hume Highway and the Hume Freeway. The lake is surrounded by lawns and trees. Experimental stocking of golden perch in 2004 and 2005. Stocking now suspended because of a change in the water management strategy and may be off line for several years.Negotiations with land and water managers continue.

Consists of three water bodies located on the western side of town, adjacent to Fell Timber Creek. They will be managed as one unit with alternate waters stocked throughout the year with salmonids and native fish. Discussions as to management arrangements and stocking plan should be completed in 2009. A recent (2008) plan is to include a second area known as the Wodonga Gravel Pits. Negotiations are underway for the creation of a fishery in this area.

Fast flowing with cascades and rapids, rubble and boulder substrate. Accessible from tracks. Some sedimentation and low water levels during summer in the lower reaches. Access is not easy in the lower reaches of the Yackandandah Creek and local knowledge is useful in locating good fishing water. Contains abundant small brown trout with some fish to 1.2 kg, some rainbow trout to 300 g, small redfin, mountain galaxias and small Murray spiny crayfish in the upper reaches and tributaries.