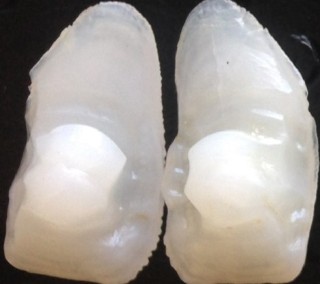 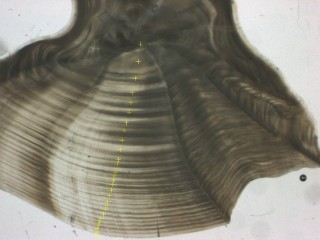 The Victorian mulloway citizen science research project, which was funded by $86,400 through the 2014/15 RFL Large Grant Program, was completed in December 2018.

Thanks to the help of over 150 anglers who took part in the project, we now know more about the biology, stock structures and population status of mulloway in Victoria. Here, we summarise the key findings from the study.

Since late 2014, 850 mulloway frames were donated by participating anglers. The total length of each frame was recorded and the otoliths (ear bones) were removed and used to estimate the age of each fish (pictured right).

Donated samples, together with a small number of scientifically collected mulloway, ranged in total length from 51 to 170 cm and were aged between 3 and 27 years. The research suggests the Victorian Mulloway fishery was largely supported by two dominant age cohorts over the past four years, which are believed to be the result of good recruitment in 2010 and 2011 in response to high freshwater flows. These findings support the requirement of favourable environmental conditions to maintain the status of populations and a strong fishery.

Genetic analyses of the frames revealed that mulloway from the Coorong (in South Australia) across to Westernport Bay, form one distinct subpopulation. While the eastern boundary of this cross-border subpopulation remains unknown (due to insufficient samples from eastern Victoria), Wilsons Promontory is the likely divide between South East SA/Victorian mulloway and the east coast subpopulation (i.e. NSW/southern Queensland).

Mulloway were found to reproduce from October to January, with Western Port Bay the only known Victorian spawning area. The majority of mulloway (90%) were caught from estuaries where individuals were predominantly less than or equal to 85 cm, and less than or equal to 6+ years, corresponding to the approximate estimate of 50% maturity. The high abundance of juveniles (i.e. fish that haven’t reached sexual maturity) found in Victorian estuaries highlights the importance of these waterways as nursery areas. With this data, we now know that the Victorian mulloway fishery is therefore largely based off a sub-adult population.

Thanks to this research, we have better information to help us reassess whether the current fishery management regulations for mulloway in Victoria are optimal.