Managed by Central Highlands Water. Not shown on map.

These are Beales, Gong Gong, Kirks, Pincotts, White Swan and Wilsons Reservoirs. All are closed to fishing except Gong Gong Reservoir which contains short-finned eel, goldfish, redfin and tench as well as stocked brown trout and rainbow trout.

As part of the River Health Program, rock-ramp fishways have been installed at Baum's Weir, Buckleys Falls, Lower breakwater, Pollocksford Weir and Ricketts Marsh gauge; and the construction of a vertical slot fishway at the upper limit of the estuary is being investigated. Willow management, re-vegetation with native species and erosion control has been carried out at numerous sites along the river.

Tributaries of the West Branch of the Barwon River

There are several small tributaries (Gosling, Matthews, Callahan, Dewing and Pennyroyal Creeks) flowing into the Barwon River upstream of Birregurra. Water is diverted from all of them into the Wurdee-Boluc Inlet then sent to Wurdiboluc Reservoir. Channel width averages around 2-5 m, with pools 40-130 cm deep. Substrate is mud. Contain abundant short-finned eel, some brown trout in Matthews Creek, abundant southern pygmy perch, numerous mountain galaxias, and common galaxias. Matthew, Callahans and Dewing Creeks are the larger waterways although not generally considered to be angling waters.

This is a 32 km section of the Barwon River with a channel averaging 5-9 m in width and with pools to 220 cm deep. Substrate is mud becoming sand downstream. There is good native riparian vegetation and willows. Some sections have good fish habitat, particularly at Forrest and at Birregurra. Angling fish are brown trout to 600 g, redfin, river blackfish to 200 g and short-finned eel. Other species are southern pygmy perch, mountain galaxias and common galaxias. This section of the river provides quite good angling but is little fished, except by locals.

A 25 km section of river flowing through farmland with an average width of 10-12 m and with pools 150-230 cm deep. Substrate is sand and mud. Contains redfin, brown trout, short-finned eel and river blackfish, with the last two species being most abundant. Other species are the same as upstream plus a few trout galaxias, and flathead gudgeon. Access can be restricted because of private property and dense bank vegetation of blackberry. Not a popular section of the river for angling.

Winchelsea to the Weir upstream of Buckleys Falls This 35 km length of the river has some very extensive pools, particularly between Winchelsea and Inverleigh and between Ceres and the Weir. The width of the channel now varies from 17-25 m. Pool depth is up to 470 cm. Substrate varies from sand, mud and clay in the pools to rubble and gravel in the riffles.

Between the Weir and Buckleys Falls

This is a 400 m length of river consisting of a deep pool surrounded by parkland. It contains abundant short-finned eel, some brown trout and a few redfin. Other species are Australian grayling, common galaxias and Australian smelt, and some flathead gudgeon and goldfish.

This is an 18 km stretch of pools 4-6 m deep in a channel up to 59 m wide. Substrate is mud and clay. Good access at extensive parkland (Queens Park) in the Geelong City area. Extensive rushes and cumbungi along the banks restrict access downstream. Suitable for bank and boat fishing. The Catchment Management Authority have constructed boardwalks and fishing platforms through the Geelong area to improve fishing opportunities. Some of these have been funded by Recreational Fishing Licence revenue. This section carries a very extensive range of fish. Angling species are European carp, short-finned eel, redfin, brown trout (downstream of the Falls), tench and congoli. Other species are very abundant common galaxias and Australian grayling; also spotted galaxias, flathead gudgeon, Australian smelt, smallmouth hardyhead, goldfish, pouch lamprey and eastern gambusia. This reach of the river contains one of the best populations of Australian grayling of any water in Victoria.

Trout and redfin can be taken on lures and baits such as scrubworms, mudeyes, crickets and yabbies. Corn and worms take European carp. This section of the river is popular with anglers being close to Geelong, however good fishing is also available further upstream.

Five rock ramp fishways have been built since 1995 opening up 450 km of river to migratory fish species and will be particularly valuable in maintaining and extending the range of Australian grayling in this river.

The channel is 50 m wide and 3-4 m deep and extends for 10 km. It shallows to 1-2 m deep at Barwon Heads. This section is under tidal influence. Accessible for bank and boat fishing. Launching ramps are situated near Barwon Heads and Ocean Grove. A wide range of estuarine fish species occur. Common fish are Australian salmon, sand mullet, yellow eye mullet, flathead, silver trevally, black bream and King George whiting. At times mulloway are present. An incoming tide in the early morning is a good time to fish. A variety of baits (pipis, whitebait, Bass yabbies, etc) are worth trying, as well as lures and soft plastics for salmon and silver trevally.

A large shallow (av. depth 100 cm) estuarine lagoon in the lower reaches of the Barwon River. Sedimentation from the Barwon River has resulted in a silty-clay substrate. Salinity fluctuates from fresh to salt water depending on the balance between the inflows of fresh water from the river and the limited tidal influence from the sea at Barwon Heads. Boardwalks and fishing platforms have been constructed by the Catchment Management Authority to enhance access for anglers. Fish are predominantly yellow eye mullet, short-finned eel, black bream and some Australian salmon. Brown trout, European carp, redfin, flounder, sea mullet, congoli, silver trevally estuary perch, luderick, shorthead lamprey, King George whiting and tailor are also present at times, depending on salinities in the lake.

Common galaxias, Australian smelt and climbing galaxias move through the lake to spawn with a return of juvenile fish upstream into the Barwon River. Access is good to several localities on the northern side and to one location (Taits Point) on the southern side. Most successful fishing is from boats. No constructed launching ramp. Best fishing for black bream is October to February when water is brackish but yellow eye mullet are abundant all year. SW winds can be severe resulting in very choppy conditions because of the shallow water.

Located in parkland East of Sovereign Hill. There is a walking track around the Lake. Managed as a Family Fishing Lake and stocked with advanced yearling rainbow (See Introduction).

A small spring fed lake in Haddon (E of Ballarat and N of Smythesdale) in a bush setting with no facilities. Carries redfin. Managed as a Family Fishing Lake and stocked with advanced yearling rainbow (See Introduction).

There are two lakes. One is usually dry and the other contains redfin and short-finned eel. Very weedy and difficult to fish. Earlier attempts at trout stocking in the 1970's and 1980's were unsuccessful.

Surrounded by flat farmland, mud bottom. Extensive beds of the aquatic weed, red milfoil, have spread over the western half of the lake, providing excellent cover for fish and making fishing difficult from boats and virtually impossible from the northern and western shores. The abundant population of galaxias is food for trout and produces exceptional fishing for large fish in cooler, wetter years. The lake has produced brown trout to 4.5 kg (av. 2 kg) and rainbow trout to 3 kg. However the combination of high nutrient levels and shallow water results in a high probability of algal blooms and fish kills in dry, hot, calm conditions.

Trout are subject to infestation with red worms (Eustrongyloides), which are not harmful to humans, however it can make the flesh of the fish very soft. Other fish are redfin to 1.4 kg, short finned eel, tench to 1 kg, European carp av. 8 kg, Australian smelt, flathead gudgeon, common galaxias and roach. Stocked regularly with brown trout and rainbow trout when conditions are suitable.

In the past, the lake has been closed on various days each year for powerboat racing.

Surrounded by grazing land, mud bottom. Main access is via Fishermans Lane, through private property, on the eastern side of the lake. This access is reached from Winchelsea by taking Gosney Road (turn off from the Highway on the western side of the town) which becomes Cressy Road. Approximately 2 km from Winchelsea turn right onto Shelford Road then travel 5.6 km and turn into Fishermans Lane which takes you to the lake. Prior permission to enter is not required, but continued access is dependent on respect being shown for property and stock.

There is also access to the south end of the lake from Cressy Road. Boat size is limited by the concrete launching ramp at the end of Fishermans Lane, and the track conditions and shallow margins of the lake at the southern access. There are submerged reefs in the middle of the western shore and the lake becomes very rough in windy conditions. Contains rainbow trout, chinook salmon, short-finned eel and common galaxias. Most fishing is for rainbow trout to 3 kg with most fish between 1 and 1.5 kg and chinook salmon averaging 1.3 kg. Chinook salmon were last stocked in 1999.

A small, ornamental lake on Cowies Creek, opposite the Ford factory in Geelong. Managed as a Family Fishing Lake and stocked with advanced yearling rainbow trout (See Introduction).

A shallow weedy lake situated in Ballarat. Small power boats are permitted. Closed to trout fishing during the trout closed season. Totally dry in 2007/2008, but normally contains predominantly brown trout to 2.5 kg, (av. 900 g), rainbow trout to 1.5 kg, redfin to 1 kg, (av. 630 g), tench to 1.8 kg, European carp and goldfish to 600 g. Fisheries Victoria stock rainbow trout and occasionally brown trout. The Ballarat Fish Acclimatisation Society also stocks brown trout in most years. Springtime provides the best fishing for rainbow trout while summer and autumn is the best time for brown trout. Best fishing for brown trout is during late evening into the night. Rainbow trout can be taken during the day. A 12 month creel survey was undertaken in 2002.

Lake Wendouree filled rapidly after the abundant rain in 2010. As a result  the lake was stocked with 90,000 rainbow trout fry in November 2010. 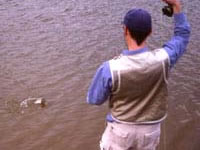 A domestic water supply surrounded by forested mountains and managed by Barwon Water. Access around the lake is difficult because of the terrain. Carries brown trout and rainbow trout to 2.5 kg and redfin to 1 kg. Stocked regularly with rainbow trout by The Victorian Fisheries Authority. There is adequate spawning for brown trout in the inflowing river. Floating mudeyes and minnows, as well as lures are successful means of taking trout.

Surrounded by flat farmland, mud substrate. A large shallow reservoir which stores water from the West Barwon Dam and tributaries of the upper Barwon River via the Wurdee-Boluc Inlet Channel, before supplying Geelong. Contains brown trout, rainbow trout, roach, redfin, eels and tench. Bank angling only is permitted and only in a specified 500 m long area of shoreline. Good facilities are provided nearby. Stocking recommenced in 1998 and the reservoir is becoming a popular fishing water with good catches of trout. Stocked with brown trout and rainbow trout by The Victorian Fisheries Authority.

Also known as the Leigh River. Flows through farmland and is in moderate environmental condition. However water is polluted from sewage water disposal and unsafe for drinking or swimming. Can have low summer flows. Contains brown trout to 900 g, although usually smaller, redfin to 450 g, short-finned eel and tench.