The larger northern section consists of forested mountains in which all the waterways originate. Annual rainfall is over 1,000 mm resulting in reliable and high flow regimes in the larger rivers. These have wide channels, well defined riffle and pool structure and high water velocities. Substrate is usually coarse material. The smaller southern area is flat farmland with unconsolidated deposits and a lower mean annual rainfall declining from 700-1,000 mm in the foothills to 500-600 mm north of Lake Wellington.

Land use is grazing and broad acre cropping with intensive cropping and irrigation in the lower Thomson River and Macalister River valleys.

The waterways in the forested, mountains are in near pristine condition. The main rivers can be reached by road by conventional vehicle but access to the tributaries often requires a 4WD vehicle. The rivers can be fished at road crossings but some walking is necessary to reach other fishing spots. Abundant and widespread angling fish are both species of eel, river blackfish, redfin and brown trout with some estuarine species such as estuary perch common in the lower reaches of rivers flowing into Lake Wellington. European carp have become established in the lowland waterways. Some waters in this Basin are commercially fished for long-finned eel and short-finned eel. 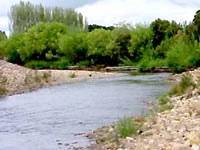 The Thomson River (downstream of Thomson Reservoir to Cowwarr Weir) and the Aberfeldy River (in the Baw Baw National Park) have been listed as Heritage River Areas.

The upper reaches of the Avon River including Turton and Dolodrook Rivers and Ben Cruachan Creek.

The upper reaches of the Macalister River at Glencairn has been listed as a Representative River for East Victorian uplands, dissected plateau.

The Gippsland Lakes, which are the receiving body for all water flowing out of this Basin.

The Australian grayling and the eastern dwarf galaxias are listed as threatened species in Victoria. (Department of Sustainability and Environment [DSE] Dec. 2007). A list of Victorian threatened species together with scientific names of species, a definition of the terms used and their national status is available on the DSE website.

Species in bold type are also listed under the Flora & Fauna Guarantee Act 1988. These species cannot be taken or kept within Victoria without a written order, license or permit issued by the Governor in Council.