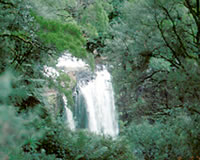 Rises in forested mountains with a high annual rainfall of 2,000 mm. Pine plantations upstream of Hopetoun Falls and native forest downstream to the Great Ocean Road. There is then farmland downstream with 9 km of estuary water. The upper reaches are 6-8 m wide consisting of predominantly shallow water with no pools.

Rubble, boulder, gravel and sand substrate. Has good habitat for macroinvertebrates, small-sized fish and spawning grounds for brown trout. The middle reaches are 18-26 m wide, with pools to 160 cm deep and rock and sand substrate. There is dense riparian vegetation of Myrtle Beech, Nothofagus cunninghamii. Access is restricted and difficult due to distance from roads, steep gradients and dense vegetation. There are a limited number of sites for tent camping at Aire Crossing. Contains brown trout to 2 kg, with numerous large brown trout 30-50 cm in length, estuary perch, Australian grayling, short-finned eel and river blackfish.

Also common galaxias, mountain galaxias, trout galaxias, climbing galaxias, congoli, Australian smelt, flathead gudgeon, pouch lamprey, shorthead lamprey, rainbow trout, occasional tench and Tasmanian mudfish. Platypus are abundant in the middle and lower reaches. Fly fishing and wading is possible in the upper reaches. Minnow style lures and wet flies are also successful in the pools. The estuary contains the usual species such as black bream, mullet, Australian salmon, and flounder. Access available for boat and bank fishing at the mouth and for bank fishing at the highway bridge. There is a substantial camping area around the estuary with adequate access for caravans.

This water storage is managed by Barwon Water. Recreational fishing is not permitted.

A rock-ramp fishway has been constructed on the East Branch at the Paradise Gauge and two culverts on the same waterway needing fishways are being evaluated.

Small, shallow, fast-flowing creek but considered to be one of the best brown trout streams in the Otways. Rises in forest, then flows through farmland. The west branch flows in relatively undisturbed forest. It is 2-6 m wide with extensive shallow water mostly less than 60 cm deep. Substrate is rubble and gravel. Contains small brown trout (av. less than 140 g). The east branch is more accessible with a larger channel and deeper pools, rock and mud substrate.

Angling fish include brown trout to 700 g, short-finned eel, congoli and estuary perch. Other freshwater species present are common galaxias, flathead gudgeon, Australian smelt, trout galaxias, climbing galaxias, shorthead lamprey and eastern gambusia. The freshwater section can have low summer flows and fishing is best at higher flows. The estuary contains black bream, mullet, Australian salmon and flounder. As part of the River Health Program, work has been carried out to stabilize and revegetate the banks, 500 m of the estuary has been re-snagged to provide habitat for estuary perch and fishing platforms have been constructed. This work has been funded by Recreational Fishing Licence revenue.

A culvert on the old road crossing has been removed to allow fish passage.

A small creek flowing from forested mountains then in farmland. Has rapids and cascades near the coast and some good pools just upstream of the highway. It has a small estuary with occasional mullet and Australian salmon. Contains brown trout in the pools, also Australian grayling, common galaxias, short-finned eel, pouch lamprey, trout galaxias, congoli and climbing galaxias.

This is a short tributary of the Gellibrand River rising in forested mountains upstream of Arkins Creek then flowing through farmland with willows or replanted native riparian vegetation. Channel width downstream of Arkins Creek is up to 6 m with sand and mud substrate. Pool depth varies from 80-150 cm. Access is difficult because of private property. Not a recognized angling water but contains river blackfish, short-finned eel, brown trout, shorthead lamprey, trout galaxias and common galaxias.

A small lake in the town, managed as a Family Fishing Lake and stocked with advanced yearling rainbow trout when conditions are suitable (See Introduction).

A rock-ramp fishway has been constructed at a gauge site and a road crossing culvert has been modified for fish passage.

A long river draining Lake Purrumbete. Flows through flat farmland of volcanic and finely textured unconsolidated soils. Substrate is mud and sand with some rubble in some riffles. Bank restoration works have been carried out and a fishway has been constructed as part of the River Health Program. Channel varies from shallow sections choked with aquatic vegetation and willows to quite extensive pools with widths of 10 m and water depths up to 2 m. Although most of the river is in poor environmental condition, the lower reaches around Timboon have good fish habitat with shelter for fish along the bank and in the deeper water. Freshwater angling species include brown trout to 2 kg, short-finned eel, redfin, congoli and estuary perch. Scrubworms, woodgrubs and mudeyes presented under a bubble float are preferred baits. Also contains common galaxias, Australian smelt, trout galaxias, and southern pygmy perch.

Best fishing is in the extensive estuary (16 km upstream from Peterborough to Curdie Vale). Regarded as a good black bream fishery with fish to 2 kg but also contains other estuary species such as estuary perch, Australian salmon to 300 g, luderick, flounder and small silver trevally. A variety of baits (podworm, black crabs, whitebait, prawn, pipis) are successful. A boat is necessary for best fishing access. Launching ramps are at Curdie Vale, upstream of the bridge, and on the northern side of Peterborough. Line should be less than 3 kg, with a heavier shock leader, pea-size sinkers and hook sizes 4 to 1.

Located in a volcanic crater, peat bottom. Wading is dangerous. Water level has been receding for some years and the lake is becoming increasingly weedy. Small, shallow-draft boats can be launched from an earthen ramp, but this is difficult when water levels are low and the shoreline is muddy. Fish can be infested with red worm (Eustrongyloides) which is not harmful to humans. Contains redfin (av. 350 g), maximum 1.6 kg, brown trout and rainbow trout to 1.7 kg, goldfish and short-finned eel. Normally brown trout can be taken on mudeyes and worms. Trolling with lures is also successful, but can be difficult because of the extensive weed beds and shallow water.

A rock-ramp fishway has been installed at a water supply offtake.

Rises in forested mountains upstream of Gellibrand then flows through farmland to Princetown. The river is of extremely high conservation and recreational value because of its river blackfish population. It is still in a natural condition in the middle reaches with areas of native riparian vegetation and good instream channel structure. It has a reliable and almost natural flow regime. Willows are actively being replaced with native species as part of the River Health Program.

The channel is of a uniform size and shape in its middle and lower reaches being 10-13 m wide with steep banks and a sand substrate. Maximum water depth is 3 m and debris and aquatic vegetation are common. Pools form 60% of the river in the middle reaches and 89% in the lower reaches. The deep water, debris and dark coloured water provide excellent cover and habitat for biota. There is an extensive estuary 7 km long which provides some limited angling. Access to the river is available from a parallel road and numerous cross tracks. Please ask permission if crossing private property.

Mulloway occasionally enter the estuary but are not abundant and are difficult to locate. Boats can be launched at Princetown. In the early 1980's a departmental creel census found that the main estuarine species targeted was yellow eye mullet and the estuary was not a popular fishing water for other species. A fishing platform has been constructed by the Catchment Management Authority.

Flows from forested mountains then through farmland. Small creek around 2 m wide, clay and mud substrate with patches of sand and gravel. Upper reaches are deeply entrenched with native riparian vegetation, debris in the channel and excellent fish habitat. Riffles are 10-40 cm deep, with pools to 60 cm.

A deep (67 m) volcanic lake surrounded by farmland, mud and rock bottom. The lake is surrounded by private property and public access to the lake is restricted to the shallow, southwestern corner, where there is a launching ramp and camping area. Abundant aquatic weed makes bank fishing difficult in this area. There is public shoreline access at Hoses Rocks, on the western shore, and through the quarry on the eastern side. A boat is necessary for best results and all areas of the lake and shoreline are then accessible. The current low level of the lake has made the boat ramp un-useable, and a temporary boat ramp has been constructed to provide boat access to deep water. 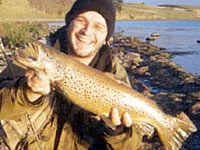 Contains brown trout and rainbow trout to 4.5 kg, Chinook salmon to 3.5 kg, abundant redfin and a few tench. Also present are short-finned eel, southern pygmy perch and abundant common galaxias. Provides excellent fishing at times, although the better fish are usually taken by the more experienced anglers. Best fishing methods are mudeyes or minnows fished under a bubble float, or whitebait fished just off the bottom. Actively casting soft plastics around the shore is a very productive for trout.

Lures trolled at various depths can also be productive, but often catch a smaller size range of fish. Wet flies fished in the shallows can also be very successful. As with many lakes, trout and salmon fishing is at its peak in the spring and autumn and redfin are most active in the summer. The lake stratifies at about 20 m during the warmer months (January-April) and we recommend that you fish just above the thermocline during this period.

The redfin population continues to expand in both numbers and total weight of fish. Stocked regularly with brown trout and rainbow trout. Chinook salmon are stocked annually if available.

Flows through forested mountains, boulder, rubble and sand substrate. Allen Reservoir is located in the lower reaches. A wide river (4-9 m) with a series of pools (120 cm deep) separated by shallow riffles. Good native riparian vegetation. Most of the river is upstream of the reservoir and has a natural flow regime. The 1.5 km of river between the reservoir and the junction of Cora Lynne Creek, has very low, sometimes zero flows. The riffles can be dry and water in the pools may have poor water quality. Contains short-finned eel, shorthead lamprey, common galaxias, trout galaxias, climbing galaxias, brown trout and eastern gambusia. Australian grayling were present pre-1951 and pouch lamprey occur in Cora Lynne Creek. Fishing is not very productive but brown trout to 2 kg can be taken. There is an estuary which contains the usual estuarine species with reported catches of black bream and luderick.

Flows for 30 km in farmland. Scattered riparian vegetation of eucalypts, blackwood wattle, tea tree and blackberry. The upper reaches of the creek are choked with aquatic vegetation in places as a result of low flows and clearing of riparian vegetation. The channel is up to 7 m wide in the lower reaches with extensive pools over 100 cm deep. Sand and mud substrate. Water is discoloured after rain. Flows into the Curdies River north of Timboon. It has areas of good fish habitat but is not recommended as an angling water. Contains short-finned eel, brown trout, pouch lamprey, common galaxias and southern pygmy perch.

There is a very small freshwater section containing common galaxias, trout galaxias, and flathead gudgeon. Has a small estuary with some fishing for Australian salmon, mullet, flounder and black bream.

Very small creek 3 m wide rising in forest but flowing mostly in farmland. Usually dry except after rain. It has small isolated pools and is only fishable in the lower 1.5 km estuary section, the mouth of which is frequently closed. Contains yellow eye mullet, flounder, flathead gudgeon and black bream and occasional Australian salmon. Not recommended for a fishing trip.