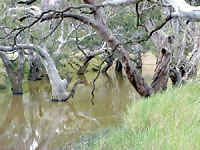 The Avoca River rises in the Central Highlands near Amphitheatre and flows north for 270 km into Lake Bael Bael. It flows within a confined valley to Charlton then enters a broad alluvial plain. It has an extremely variable flow, ranging from long periods of low flow (less than 50 ML/d) to floods. In dry years, flow stops for many months.

The river is less than 2 m deep along its entire length except for a 27 km section between Logan and Coonooer where there are pools 2-5 m deep. The river is very saline with anaerobic (low oxygen concentration) water in the bottom of deeper pools during low flow periods. The river has native riparian vegetation along its entire length and reasonably stable banks. In addition to the fish species listed below it was reported in 1976 to carry silver perch and freshwater catfish. Other species reported to occur in the river (location uncertain) were Murray River rainbowfish (1989), unspecked hardyhead, eastern gambusia and western carp gudgeon. There has been no comprehensive survey of fish populations by Victorian Fisheries Authority.

Community groups and landholders in the lower Avoca area are being encouraged to participate in activities such as revegetating of river banks and fencing out of stock to improve instream habitats as part of the Murray-Darling Basin Native Fish Strategy.

It is stocked regularly with golden perch and Murray cod.

The river is 6-10 m wide with gravel and clay substrate. It has shallow riffles, 20-30 cm deep with instream reeds and cumbungi. Banks are low with riparian vegetation of canegrass, cumbungi and red gums. At Avoca township, there are some good pools to 150 cm deep.

Access is good at Avoca and along the Bealiba Road where there is an open area next to the river (no facilities) with some good pools for fishing. European carp is the predominant fish caught around Avoca but the river also contains redfin, av.250 g, max. 500 g, some brown trout to 700 g, goldfish, Australian smelt, occasional golden perch, flathead gudgeon, mountain galaxias, flathead galaxias and abundant small blackfish. River improvement work under the River Health Program is occurring in the section of river listed as a Representative River. This consists of bank revegetation, fencing and erosion control.

The river at Logan now flows in a wider open channel but water is confined to long lengths of narrow (6-7 m) riffles and shallow runs (20-100 cm deep) separating the pools. Further downstream it is entrenched in a deep narrow gully. Here, the channel is only 6 m wide with the runs and pools over 100 cm deep. This section of the river is accessible from the Coonooer-Gowar-Logan Road and has some good habitat with some snags, clear water and small pools. There is also access and some good habitat at Coonooer Bridge. Here the river is up to 10 m wide with a series of small pools 100-200 cm deep, separated by shallow riffles choked with canegrass. Substrate is clay.

The banks are low with riparian vegetation of red gums and canegrass. Fish species taken in surveys are redfin to 700 g, a few brown trout, flathead gudgeon, European carp, goldfish, golden perch, tench and a few blackfish upstream. A few Murray cod have been caught, possibly from a release in 1972.

The river flows for 25 km through flat farmland and has a continuous riparian vegetation of mature red gums. Access is not good along this section with only a few cross roads. At Seven Mile Road the river is 10 m wide and has 6 m high banks. There are extensive runs and pools of turbid water 1-2 m deep. Flow is very sluggish in summer; substrate is sand. Riparian vegetation is canegrass at the waters edge and red gums.

There is walking access along the river and good habitat with instream snags, bank vegetation and deep water. Contains the same species as in the previous section with the predominant angling species being redfin, European carp and golden perch. Regularly stocked around Yawong with golden perch. Also stocked from Charlton upstream to Nattie Yallock in 2008, with Murray cod.

The river is deeply entrenched (6-7 m) in flat farmland but has irregular flow and dries to a series of small stagnant pools (100 cm deep) separated by dry or damp substrate and sand banks. The river downstream from Charlton,is 4 m wide, with grass and small red gums growing in the channel. Carries mostly redfin, European carp and goldfish; and possibly a few golden perch, when the river is flowing.

This is the Avoca town water supply and fishing is not permitted.

Ramsar site - listed as a wetland of international significance under the Convention on Wetlands (Ramsar, Iran 1971).

This is the terminal lake of the Avoca River and is situated northwest of Kerang. It is surrounded by agricultural land and has a mud bottom. The water level fluctuates and it dries out in some years. Summer water depths are less than 2 m but can increase to 3 m during winter flows. It is part of the water distribution system supplying water to orchards, vineyards and pasture between Kerang and Swan Hill. It contains redfin, European carp and possibly bony bream. A boat is required for fishing but this is not a popular fishing water. It usually has a salinity of around 2,000 EC, however increased flow in the Avoca River can move higher salinity and anaerobic water into the lake.

A fish death of bony bream in 1989 is thought to have been caused by a combination of low water temperature (10-11o C) and low dissolved oxygen concentration from a recent flood of water from the Avoca River into the lake. It was stocked with Murray cod in the 1970s. Dry in 2008/09 and not listed for stocking.

A small domestic storage now managed by the Bealiba Progress Association. Surrounded by scrub and grazing land, gravel and clay bottom. Contains redfin, mostly very small but occasionally to 900g, goldfish and tench. Becomes very shallow and sometimes dries out in summer. It is likely to be stocked with golden perch once stocking is approved.

A small, deep, weedy-lake filled from the Avoca River. It is surrounded by private property making access difficult. Contains some redfin to 1.4 kg and tench but is not recommended for angling. Dry in 2008/09.

A very shallow lake with sandy beaches. Subject to high summer water temperatures. Water level fluctuates greatly. Contains redfin to 1.4 kg and tench to 2 kg. It has been stocked with golden perch in recent times, however, it dried out after 2002. On completion of the Wimmera Mallee Pipeline in 2010, it will no longer be part of the Wimmera-Mallee Stock and Domestic Supply System. However it will receive a small annual water allocation for recreational use. Currently (2008/09) dry. No stocking plans.

A swampy lake surrounded by cereal crops. Only receives water when the Avoca River has high flows. Sometimes dries out. Abundant submerged timber. Contains European carp and redfin. Dry 2002 to 2009.

A town supply dam located 4 km east of Avoca and south of the Maryborough Road. Closed to all fishing. (Access used to be available to members of the Avoca Angling Club on a few specified days). Contains redfin to 1.9 kg and tench to 700 g. Last stocked in 1973.

A deep lake near Kerang surrounded by cereal crops. Restricted access because of private property. Fills from the Avoca River and seldom dries out. Carries European carp, a few redfin and tench but not recommended for angling.

An old swimming pool adjacent to Pioneer Park, accessible from Dundas Street. Open fenced area with no trees or shelter. Stocking is dependent on variable water quality.Managed as a Family Fishing Lake and subject to stocking with advanced yearling rainbow trout (see Introduction).

A small lake close to the caravan park. Contains some redfin. It was stocked with trout in the 1970s but this was discontinued because of a very poor return to anglers.

A small water containing only redfin. Stocked with trout in the mid 1970s but produced very few fish.

Town water supply storage, managed by Central Highlands Water Authority, located 2 km south of Redbank. Surrounded by forest. Boating is not permitted. Carries some redfin. Was stocked with trout by Victorian Fisheries Authority in the 1970s. Has not been stocked since 2002, but may receive golden perch when the water level is satisfactory.

A shallow lake surrounded by cereal crops. Dries out occasionally. Although there are some good redfin and European carp at times, it is seldom angled. Dry in 2008/09.

Located approximately 5 km from Wedderburn and just north of the Charlton Road. This is a shallow storage with little marginal vegetation. Boating is permitted but it is fished mainly by locals. Contains small redfin. Trout stocking in the 1970s. There are two lakes, the northern lake being shallow, and a good bird watching area where no boating is permitted. The southern lake has camping and picnic areas and a boat ramp at the northern end of the lake. When full, it is up to 6 m deep and has extensive weed beds. It is fed by a channel and the water level is depended on the Committee of Management purchasing water from Goulburn-Murray Rural Water Authority. It is currently dry and is likely to remain so for the next few years. It used to contain redfin and European carp, and was stocked with golden perch in the late 1990's. When last surveyed in 2000, it carried golden perch from 2-8 kg and tench to 1.5 kg. On completion of the Wimmera-Mallee Pipeline 2010, this lake will no longer be part of the Wimmera-Mallee Stock and Domestic Supply System. However it will receive a small annual water allocation for recreational use. Currently (2008/09) dry but will be stocked with golden perch when conditions are suitable.

Domestic water supplies and power boats and swimming are prohibited.

Consists of two storages approximately 400 m apart both of which are regularly stocked with brown and rainbow trout by Victorian Fisheries Authority, when water levels are suitable.

Surrounded by forest and located within the Kara Kara State Park. It contains redfin av. 650 g, max. 1.5 kg, and brown trout to 1.1 kg. This is a small, but popular angling water.

Following several years of very low water levels, this reservoir filled rapidly after the abundant rain in 2010. As a result the reservoir was stocked with 1500 rainbow and 1500 brown trout in November 2010.

Surrounded by cleared land and has little aquatic vegetation. A popular fishing water for both trout and redfin and usually provides better fishing than the top storage. Contains brown trout av.800 g, max. 1.9 kg and redfin av. 400 g, max. 2 kg. Best redfin fishing is in the deep water at the wall.

1500 rainbow trout in November 2010 when the reservoir returned to normal water levels.

Listed under Ramsar as First Marsh.

Fills only in wet years. May then contain European carp. Usually dry.