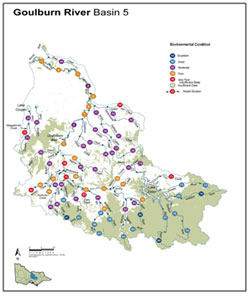 Example of  'river reaches' and CMA region maps used in the survey.

A key driver of the survey was to ensure recreational fishers priorities' were captured in the Victorian Government's review of the River Health Strategy (Victorian Waterway Management Strategy) which provides a blueprint for future investment in river health restoration.

The survey also provided some valuable insights into fishers' preferred species, how fishing can be improved and why particular locations are preferred.

The web-based email survey was deployed in May 2012 and was open for around four weeks. It was sent to recreational fishing licence holders who purchased their licence online and provided their email address. The survey utilized the

The information below is a summary of the key findings of this survey. For more information on great spots to fish across Victoria, take a look at our Inland Angling Guide.

A full electronic copy of the survey report can be provided by emailing Anthony Forster on anthony.forster@vfa.vic.gov.au.