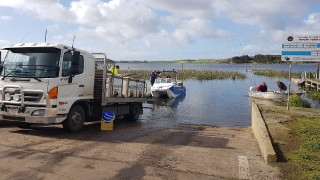 In April 2018, Minister Pulford announced that more than 6 million fish had been stocked over the previous 12 months.

That's 1 million more fish than the Target One Million commitment of 5 million!

Several fish stocking records tumbled in delivering this including:

The 6 million fish were released into more than 200 waters and consisted of:

The full list of native fish stockings is at www.vfa.vic.gov.au/nativestocking2018