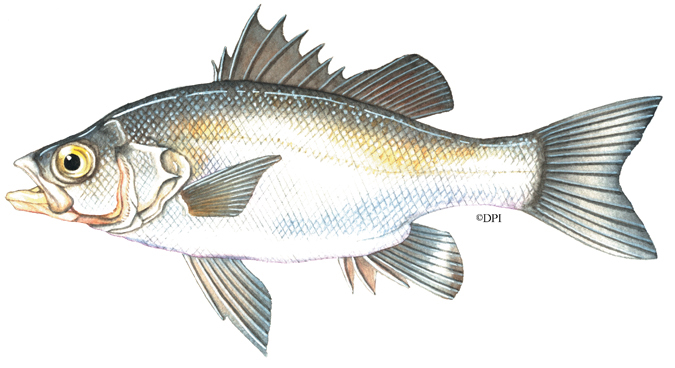 Forked tail. Concave (hollow) head profile. Fairly long, tapered snout. Eye is moderately large. Large, oblique mouth, with the gape reaching to below the middle of the eye. Lower jaw protrudes. Moderate scales which are also on the cheeks and gill covers. Prominent lateral line. Black to dark grey or olive-green, silvery on the back, becoming lighter on the sides. Whitish or silvery belly. Sometimes has purplish or reddish tints on the head. All fins are dark coloured, often with a greenish tinge.

Coastal stream systems along the entire Victorian coast. Less common in Western Port and Port Phillip Bay though historically abundant. Abundant in most streams and estuaries where it occurs.

Rivers and lakes, most common in estuaries and lower freshwater reaches of coastal streams. Most abundant in estuaries and tidal reaches. Seems to prefer deeper and more saline waters than Australian bass, but regularly found in areas with less than 1,000 p.p.m. salinity.

This species can grow up to 10 kg, but is commonly much smaller, usual weight range being 400 g - 2 kg. Appears to prefer more saline and deeper water than Australian bass, but moves regularly into freshwater.

Spawning occurs in the mouths of estuaries in salt water during July and August when water temperatures are between 14 and 19°C. Carnivorous, eating small crustaceans and fish, bivalve molluscs and worms. Feeds closer to the bottom than Australian bass.

This species of large estuarine fish is widely distributed (78% of waters) in coastal rivers and estuaries in eastern and western Victoria. Fish have been found to be up to 8-9 years old by which time they have reached 45 cm in length and up to 1.8 kg in weight. They are most abundant, grow fastest and live longest in deep-channelled rivers such as the Glenelg, Hopkins and Curdies in western Victoria and in the Tambo, Mueller, Bemm, Genoa and Wallagaraugh Rivers in Gippsland.

Adults spend all their life in brackish water although young fish (1-3 year old) have been found in freshwater on occasions. Adults usually live in low salinity waters in the upper reaches of estuaries but move into higher saline water (19,000 EC) during July to December to spawn. Spawning starts earlier in Gippsland in July but not until mid October to early November in western Victoria. Eggs are laid on submerged rocks and beds of aquatic plants.

The later sites are important 'nursery areas' and carry an abundance of fingerling estuary perch. Their food supply is of particular importance to anglers as it gives a clue as to best baits. Fish remains formed 50% of the contents of stomachs examined during a major study by the Department between 1975 and 1980. Other food items were prawns and shrimps, which were found in 41% of all stomachs. It was concluded that estuary perch are mainly surface and mid-water feeders during winter and bottom feeders during summer.

Identified fish remains included 52% yellow-eye mullet and 22% gudgeon, with the remainder being tupong, pygmy perch, common galaxias, brown trout and short-finned eel. The conclusion from a second departmental study, completed in 1986, was that harvesting of this species by anglers was negligible and usually accidental.

Few anglers are adept at fishing for and catching estuary perch. Stocks are greatly under-exploited and provide opportunities for a very rewarding fishing experience. There are good numbers of large fish with mean length of fish captured by the Department being 32 cm and averaging 500 g in weight. Their eating quality (flavour and texture) are superb. They can be confused with Australian bass but there are several differences. Estuary perch have a deeper body, a dished head and protruding lower jaw.

A good sporting and eating fish, it is not heavily exploited in some parts of its range (eastern Victoria) because of difficulty of access to streams and estuaries, and a general lack of knowledge of the abundance and distribution of the species and its sport fish qualities. Good fighting fish and is readily taken on artificial lures and baits such as worms and prawns. Distribution and abundance appears to have been affected by instream structures, flood mitigation work and pollution. The seasonal closure by sand bars of some estuaries, which prevents tidal inflows, may have marked effects on breeding success of the species.

Recreational Fishing Licence requirements, and the regulations affecting the taking of Estuary perch in Victoria, are provided in the Victorian Recreational Fishing Guide, available free from RFL sales agents and DEDJTR Offices and Information Centres.