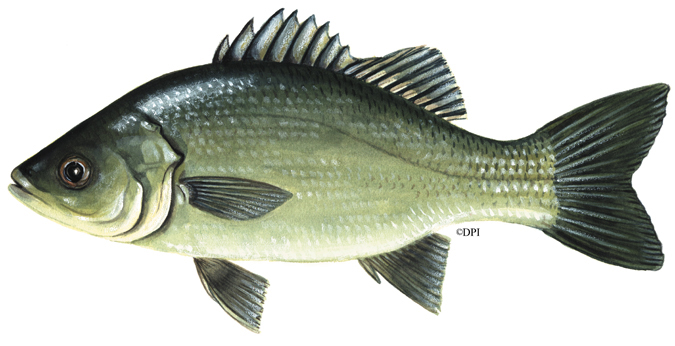 Tapered snout. Moderately large eyes on the side of the head. A large, oblique mouth extending to below the middle of the eye in adult fish. Lower jaw protrudes beyond upper jaw. Dark olive-green or grey on the back and upper body, lighter on the sides. Yellowish-white to silver on the belly. Upper and lower rear fins often have white edges. Fins are generally greyish to colourless, and translucent. Usually have a very distinct lateral line, following the upper body profile. Often have a red eye colour when freshly caught, which fades quickly after removal from water.

Coastal species, occurring in Victoria eastwards from Wilsons Promontory, but rarely reported west of the Promontory. Not common as the Victorian populations are the southern limit of wider and more abundant distribution in New South Wales and Queensland. Populations tend to be small in number in Gippsland.

Australian bass have also been stocked into several large impoundments in recent years such as Lake Bullen Merri in the south west and Blue Rock Dam and Lakes Narracan and Glenmaggie in Gippsland. Anglers have reported successfully catching fish above legal size in these impoundments.

Several fish have been taken from the Yarra River below Dights Falls. Anglers have also reported catching Australian bass in Lake Eppalock in 2009. This is the result of illegal stocking.

Australian bass have been located by departmental surveys in at least 21 rivers. Surveys from 1975-80 and in 1993/94 revealed some information on Australian bass but much is yet unknown. Adult Australian bass 55 cm in length and 14 years old have been captured in Gippsland. Surveys caught most Australian bass in areas of boulder and gravel pools. The species is readily caught with hook and line or by lures but the resource is probably under-utilized at present. Stocking of the species in inland lakes elsewhere in Victoria may result in more interest in angling for this species.

Victorian coastal rivers and lakes, it appears to be much more tolerant of freshwater than Estuary perch and moves far upstream.

Known to reach 575 mm in length and 3.4 kg in weight, but most commonly taken in Victoria between 750 g and 1 kg. Moves from freshwater to estuaries to breed, with a spawning season from June to September in water temperatures 14-20°C.

Successful breeding appears to require water salinity levels of between 12,000 and 15,000 p.p.m. Body colour may change with sexual maturity.

Males appear to mature at a smaller size than females. Eggs are transparent and non-adhesive. Young fish hatch within 5 days and soon begin feeding. The Australian bass is carnivorous, feeding in estuaries mainly on shrimps, insects, worms and smaller fishes. In freshwater it will feed on insects falling onto the water surface and a variety of organisms living on or near the bottom such as insects, crustaceans, tadpoles and small fish. Stomachs of Australian bass taken in Gippsland were found to contain mostly (80-98%) shrimp and prawns, with fish remains (2-11%) and also various quantities of aquatic insects.

An excellent angling species, although much of the Victorian population is relatively inaccessible because of access to the streams. Specimens trapped in impoundments have been known to live for more than 15 years. Species can now be produced in hatcheries.

One of the best sport fish in south-eastern Australia, although it is not a major fishery in Victoria. Readily caught on artificial lures and a variety of baits. An aggressive feeder and a vigorous fighting fish on the line.

Dams on coastal streams are affecting seasonal movements and possibly survival of populations in some streams.

Recreational Fishing Licence requirements, and the regulations affecting the taking of Australian Bass in Victoria, are provided in the Victorian Recreational Fishing Guide, available free from RFL sales agents and VFA Offices and Information Centres.