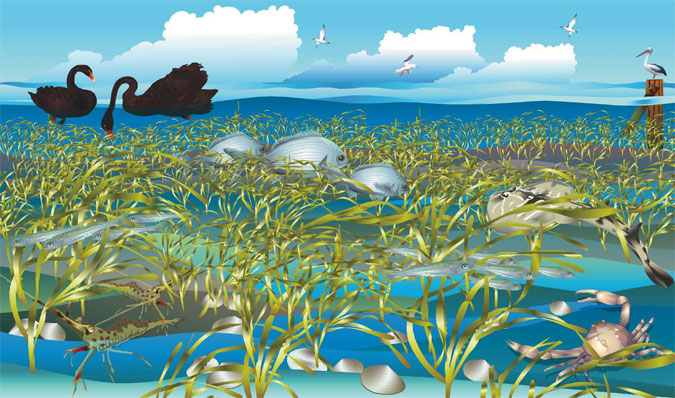 In the sheltered parts of many bays and estuaries, flowering plants called seagrasses can establish extensive underwater pastures that are some of our most important but challenged coastal habitats. Seagrasses are critical in the life cycles of many of our important fish species as well trapping sediments before they enter the sea.

While eaten directly by very few animals, the seagrasses provide shelter as well as contribute large amounts of plant material that breaks down to form detritus, a major food source for many invertebrates living in the seagrass habitat.

In places where low tides leave muddy sediments exposed to the air there may be few larger plants. These mudflats, however, teem with worms and other small animals which provide an important food source for wader birds, some of which come from as far away as the northern hemisphere.

Seagrasses in Victoria have suffered from a massive decline in the past three decades. Declines have been most serious in embayments with catchments that have been extensively modified for urban or agricultural development. As seagrasses may take many decades to recover once lost, seagrass decline is a major community concern. Loss of seagrass leads to reduced habitat for many commercially significant fish and internationally important bird species.

Seagrass
(Zostera muelleri (intertidal), Heterozostera tasmanica (subtidal) and other species)
Seagrasses are flowering plants well adapted for living in seawater. They grow in sheltered areas and trap sediment. While eaten by few animals directly, seagrass debris is an important food source for many invertebrates. Seagrasses also play a critical role as habitat for many species of juvenile fish.

Black Swan
(Cygnus atratus)
While living in a broad range of aquatic habitats, swans are often seen on small bays and estuaries. Feeding on seagrasses and other underwater vegetation, swans convert the fibrous seagrass into swan droppings that are used as a source of food for many invertebrates that feed on detritus.

Glass Shrimp
(Macrobrachium intermedium)
These common transparent shrimp occur in large numbers in seagrass beds. These animals are scavengers feeding on a wide range of dead material including detritus such as swan droppings. They play an important role in the conversion of detritus into food for many species of fish and birds.

Bivalve Mollusc
(Tellina deltoidalis)
Bivalve molluscs are numerous in seagrass beds hidden beneath the mud. They feed by extending a tube-like siphon to the surface of the mud through which they can draw in water containing plankton and detritus as well as the oxygen they need. There are many different species of bivalves that live in mudflats.

Black Bream
(Acanthopagrus butcheri)
The small juveniles of black bream are often found over shallow seagrass beds, while larger fish live in deeper holes. This species is popular with recreational and commercial fishers. Size and catch limits are important to ensure that this species is fished sustainably for the future.

Hardyheads
(Leptatherina Presbyteroides)
These small silver fish are probably the most numerous fish found in southern Australia and can form large schools in shallow waters such as over seagrass beds. Hardyheads feed on both bottom living and planktonic prey. They are eaten by many larger species of fish and a number of bird species.

Pebble Crab
(Philyra laevis)
These scavenging crabs are often numerous on intertidal mudflats and amongst seagrass beds. Pebble crabs bury themselves in sediment when the tide goes out. Males have much longer claws than females and can sometimes be seen carrying females around prior to mating.

Banjo Shark or Fiddler Ray
(Trygonorrhina guanerius)
Often found in very shallow waters, these harmless rays feed on crustaceans and molluscs that are found in seagrass beds. Their beautiful markings and slow moving habits make them difficult to see on the bottom of bays and estuaries. Banjo sharks have no spines and have few natural predators apart from humans.

The coastal mudflat environments along Victoria's Coast support a rich and diverse community of living creatures in amongst the seagrasses that grow on them. Seagrasses are flowering plants that use sunlight energy to make food materials.

The habitat created by seagrasses provides shelter for many animals. Under the water, fish and invertebrates can hide from predators amongst the seagrass leaves. Many important commercial and recreational species of fish, such as King George Whiting and Black Bream, use seagrass areas as nurseries.

In areas where seagrasses are exposed when the tide recedes, the seagrasses provide protection for the mud surface from the drying effects of the sun, keeping conditions moist underneath. This provides shelter for invertebrates such as crabs and molluscs.

Seagrass communities are unusual in that very few animals can eat seagrasses directly because they are highly fibrous. Black swans, however, have specialised plates in their beaks for crushing the fibrous material and in their gut there are many microbes that can convert some of the material into food for the swans.

Swan droppings become a major food source in the seagrass community. Many scavenging animals such as worms, shrimp, bivalve molluscs and crabs feed on the swan droppings and in turn are eaten by animals such as birds and fish. Dead seagrass remains that wash up on the shore are attacked by sandhoppers or amphipods which may then be eaten by the fish which inhabit this habitat.

Care for coastal areas is critical to the survival of seagrass communities along the Victorian Coast.