(excerpt from the Victorian Rock Lobster Fishery Management Plan 2017, amended to incorporate changes from 2019 and 2020)

Harvest strategies provide a structured framework for assessing the status of a fishery and a set of rules to determine what the annual catch limits will be.  Decisions regarding catch limits are therefore set out in advance, ensuring that fishers, fishery managers and other relevant stakeholders know what action will be taken in response to the conditions in the fishery (Sloane et al 2014).

Principles of the harvest strategy

The exploitation rates when the catch rate is at and above the upper reference point are:

Performance indicators measure and track the performance of the stock against the operational objectives in this harvest strategy and are integral in determining the level at which the TACC will be set.

Three biological performance indicators are used in setting the TACC:

A further performance indicator, available biomass, will be used in the assessment of the fishery.  This indicator however does not result in explicit TACC adjustments in the fishery in the way egg production, standardised CPUE and pre-recruit index do.  Available biomass, as well as historic exploitation rates, is used to provide a more comprehensive picture of the status of the fishery and trends over time.

2.3 Reference points for the performance indicators

Limit reference points (LRP) act like a safety measure as they establish the point at which there is significant risk to the sustainability of the stock.  The LRPs used in this harvest strategy are:

An upper and a lower LRP have been established, both of which are CPUE-based.

If the standardised CPUE starts to fall and then breaches the upper LRP, the harvest rates are decreased sequentially until the lower LRP is reached.  If the LRP point is breached, the fishery will be closed to all fishing.

Threshold reference points can represent a threshold value which triggers a certain management action or a pre-determined management response.

In this harvest strategy, threshold reference points have been established for the PRI. The PRI threshold is determined using data from the fixed-site surveys and on-board observer program and is averaged, weighted by region based on past commercial catch during a reference period of 2005 to 2014.

To be eligible for an increase in the TACC in an upcoming season, the PRI for that stock assessment period must be above the threshold level for that zone.

The PRI thresholds are:

The target reference point defines the level or value of an indicator that is considered ideal or desirable and at which management should aim.

A target reference point is not explicit in this harvest strategy; however, it is an objective of the management plan to develop a long-term maximum economic yield (MEY) target reference point for the stock.  MEY is the theoretical catch or effort level that maximises the profit of the commercial fishery.  MEY occurs when the total fishing revenue minus total fishing costs is maximised. Economic efficiency in a fishery suggests that the stock is protected and the net returns (i.e. the profits) for fishers are maximised (Australian Government 2007).

Decision rules to set the TACC

The annual TACC will be set using the following decision rules:

Model estimated egg production must be above the limit reference point of 20% of the unfished level with a 90% probability.  This decision rule must be satisfied before the CPUE-based harvest strategy can be used to set the TACC.

If this decision rule is not met, the TACC will be determined using the rock lobster fishery model to ensure that the TACC returns the egg production to above the limit reference point within two years with a 90% probability.

When Decision Rule #1 has been met, the TACC is set using the standardised CPUE tables.  Refer to Tables 7 and 8, for the Western and Eastern Zones, respectively.

Step 1: Use the standardised CPUE from the preceding season to identify the CPUE band.

Step 2: Determine the TACC level according to the following conditions:

One-jump rule: the TACC can only be increased one level per year.

The TACC will be set at the level that corresponds to the standardised CPUE.

The levels of TACC are pre-set and based on the chosen harvest rate.  The values of the TACCs and the corresponding CPUE are in the Tables 8 and 9.  These tables, in association with the decision rules will be used to set the TACCs for the fishery over the life of the Management Plan.

Table 8 (below left) and Table 9 (below right). CPUE thresholds and corresponding TACC levels for the Western Zone and Eastern Zone, respectively 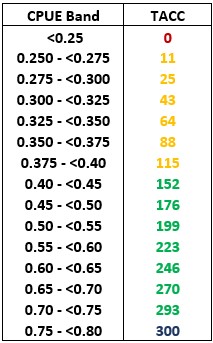 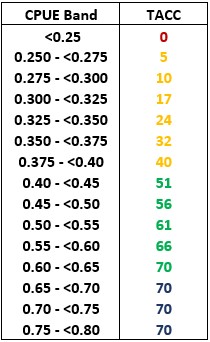