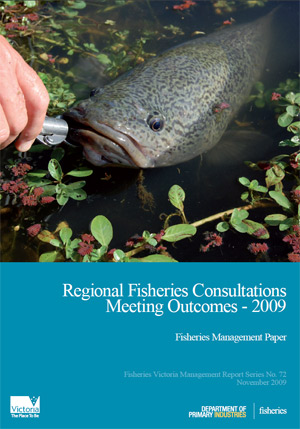 The CONS stocking commitments scheduled a total of 1,761,791 fish to be stocked in Victorian public waters for recreational purposes in 2009.

The CONS meetings held in February 2009 decide upon the stockings which will occur in 2009. The meetings are the focal points for information from various sources, including requests and viewpoints from anglers. Draft reports of the meetings are prepared by Fisheries Victoria and circulated to participating stakeholders for comment prior to publication of this document. This report is a summary of the key outcomes of the 2009 CONS meetings.

The Victorian Government has committed $13.5 million to enhance recreational fishing opportunities throughout Victoria, including a 30% increase in salmonid and native fish stocking between 2006-2010 in Victorian public water for recreational purposes. Stakeholders have input into the process that determines what fish species go where and when, through their participation in the annual regional consultative meetings (CONS).

The role of the meetings is to:

The Department acknowledges and commends the important contribution made by stakeholders who provide their time to prepare for and attend these meetings.

The stocking plan for salmonids developed from CONS meetings identified a suggested stocking profile of 386,685 salmonids to be stocked in the 2008 calendar year if favourable environmental conditions occurred.

CONS scheduled 995,150 natives to be stocked in 2008 if favourable environmental conditions occurred.

Over 833,250 fish were stocked representing 84% of the stocking commitment.

Click the below map to view a larger versions.

The following is an overview to key statewide issues relating to fish stocking. Issues relating to each region are further described later.
Fish stocking in lakes and streams The salmonid and native stocking tables included in appendix 1 detail the planned public water stocking rates for the 2009 salmonid and 2009/2010 native stocking seasons and are determined through the regional stakeholder
consultation process (CONS).

The proposed figures are based on the projected water levels for each of the identified water bodies. Prior to stocking, each water is assessed and where required, fish numbers adjusted according to the prevailing conditions. Any figures shown in brackets are the maximum stocking rates approved if conditions substantially exceed projections.

The Family Fishing Lakes Program stocks ready-to-catch advanced yearling rainbow trout into suitable impoundments during the second and third school holidays. The primary purpose is to provide a recreational fishing experience to junior anglers and anglers with restricted mobility. The waters selected are close to populated areas with good access. There are 56 suitable waters located near urban centres throughout Victoria that are stocked with ready to catch rainbow trout as part of the Family Fishing Lakes stocking program.

Five of the Family Fishing Lakes have been selected to be developed as Premier Lakes as part of the Go Fishing in Victoria initiative. The Premier Lakes will be stocked with larger Premier rainbow trout (>1 kg) at least four times per year (subject to suitable water conditions). This is in addition to the normal advanced yearling trout that are also stocked. The Premier Lakes are Lillydale Lake, Hyland Lake, Jubilee Lake, Eildon Pondage and Kennington Reservoir. This program is due for completion in mid 2010.

To cater for more experienced anglers, sections of the Hopkins, Goulburn and Kiewa rivers will be developed and promoted as Premier Rivers. The rivers have been chosen for their existing riverine environments and high recreational angling values. The Hopkins River was launched in April 2009. The Premier Rivers have increased access for anglers.

The Department of Primary Industries is exploring options for developing a stock enhanced recreational fishery for Macquarie perch. A national workshop in 2008 identified research and policy directions necessary for the trial of a breeding program for the species. A summary of this meeting is available at www.depi.vic.gov.au/fishing-and-hunting then click on Recreational Fishing. A steering committee consisting of
representatives from Native Fish Australia, VRFish, the Arthur Rylah Institute and Fisheries Victoria will guide the program. A breeding program has recently begun at Snobs Creek.

The Victorian Government is implementing new consultation arrangements to assist in the future management of the community's fisheries resources, with a strong focus on providing a broader range of opportunities for engagement and greater transparency and accountability in decision making for all parties, including:

Fisheries Victoria is currently working with the Statewide Recreational Fishing Roundtable to provide advice on the broad priorities for future investment relevant to improving opportunities for recreational fishing. This includes conducting nine regional forums to seek ideas from local fishers and an upcoming random survey of licence holders.

The following Inland Fishery Management Plans have been declared under the Fisheries Act 1995:

The following Inland Fishery Management Plans are in preparation:

The Victorian Governments fish production facility at Snobs Creek has been identified as a preferred site for a $1.3 million upgrade and redevelopment which will increase its capacity to produce greater numbers of native fish for stocking into Victorian waters. Detailed site investigations are underway.

The investment will include the construction of a number of brood fish ponds and plankton ponds which are used in the rearing of larval and fingerling fish. In addition, the existing buildings and infrastructure will receive an extensive upgrade to optimise future native fish production.

The Department of Primary Industries is sourcing Australian bass broodstock from rivers flowing into the Gippsland lakes to supply to a private contractor to breed Australian bass. It is hoped that if successful, a consistent supply of Australian bass fry will deliver on previous CONS stocking commitments. A desktop review of fish population data is also being conducted to assist in understanding wild bass population trends over time in these waters.

The Futurefish Foundation is working with Fisheries Victoria towards developing a recreational Barramundi fishery at Hazelwood Pondage near Morwell. The suitable water temperature for the fishery is due to water used for cooling the power station. A detailed translocation risk assessment is being conducted using independent expertise. The outcomes of this assessment will be considered by the Translocation Evaluation Panel with advice then provided to Fisheries Victoria.

In 2007, a Ministerial Taskforce for bushfire recovery allocated $455,000 for a three-year project to support the recovery of the recreational fisheries in bushfire damaged areas.

The project had three main objectives:1. Monitor and assess the recovery of recreational fisheries
2. Determine behavioural drivers of anglers in the bushfire area
3. Undertake a social and economic study of the area.

The study is now complete. An interim report can be found at www.dpi.vic.gov.au/fishing then click on Recreational Fishing and a final report will be available soon.

Trout cod fry have been stocked into Lake Kerferd in 2008 and 2009. New broodstock have been sourced and offspring will be stocked into Kerferd and Sambell Lakes in 2010. A research project will investigate the validity and efficiency of trout cod stockings, using Lake Sambell as a control to compare experimental results.

The Goulburn River is well-known as a world class trout fishery and this was recognised in September and November this year when 2300 ready-to-catch trout were released into the river for the start of the trout open season to provide greater opportunities for recreational anglers. This stocking program has provided a boost for regional economies affected by the bushfires and will be monitored over the next 3 years via research on this fishery and an enhanced stocking program of 5,000 fish per year.

To boost opportunities for native fishing in the northern region, over 250,000 golden perch and Murray cod have been released into the Nagambie Lakes. This massive stocking program commenced in 2008 and will continue each year for five years to develop a world class native fishery in Nagambie.

Over 275,000 golden perch and 12,000 dart tagged yearling Murray cod have been stocked into the Kerang lakes since 2003 when inland commercial fishing licences were bought out using funds from the sale of recreational fishing licences.

A 2008 survey by Fisheries Victoria has shown good numbers of golden perch in the Kerang Lakes. Of the 41 golden perch caught the largest weighed 2.5 kg and measured 50 cm in length. More than 200 redfin were also captured from the three lakes suggesting healthy populations of this popular table species.

Parks Victoria released the draft Management Plan for the Devilbend Natural Features Reserve at the end of 2008 and undertook a significant period of public consultation. VRFish ran a workshop in late February 2009 to enable recreational anglers to have their say about the reserve. As a result of the workshop VRFish developed a detailed submission to Parks Victoria on the draft plan. Parks Victoria has reviewed draft plan submissions and is in the process of finalising the management plan. Fisheries Victoria has completed a risk assessment as part of the process in developing a stocked recreational fishery in Devilbend and Bittern Reservoirs. This was done to assess the environmental risks involved in translocating fish to these waters.

After a detailed translocation risk assessment and receiving advice from the Translocation Evaluation Panel, the Executive Director of Fisheries Victoria has approved the application to stock estuary perch into Lake Bolac. This project was initiated by the Lake Bolac Angling Club. Due to impacts from drought, the stocking of estuary perch into the water is on hold until the water is suitable.

As part of the Enhanced Recreational Fishing Program, an access track to Aringa Reservoir near Port Fairy has been upgraded, providing year-round access for shore-based anglers and boats. Fishcare South West managed the improvement on behalf of Fisheries Victoria.

Fisheries Victoria in collaboration with Parks Victoria has reopened boat access to one of Victorias most popular fishing locations at Lake Purrumbete, near Camperdown, through a $50,000 grant as part of the Enhanced Recreational Fishing Program. This program is administered by DPI as part of the 2006 Labor Financial Statement commitments.