This article was published in Freshwater Fishing Australia Magazine. For a full copy please email taylor.hunt@vfa.vic.gov.au

Fish stocking is the mainstay of many impoundment fisheries in Victoria providing excellent recreational fishing for anglers. Deciding how many fish to release into a stocked waterbody is a decision that freshwater fisheries managers often have to make in consultation with anglers and other stakeholders. So when The Victorian Fisheries Authority managers said they were successful in breeding enough Chinook salmon for stocking, and wanted some scientific input into how many fish they should stock – we were happy to assist. Helping to restore the famous Chinook salmon fisheries in Victoria's crater lakes, the only place in Australia where you can catch the world class sport fish, is an exciting endeavour to undertake.

The crater lakes of Lakes Bullen Merri and Purrumbete, located in south-western Victoria, have a long history of top notch fishing on the back of fish stocking. Stories of Chinook salmon being caught have been shared for years. Apparently there have been some good ones caught too. The dried skin of Henry Rantall's 23 lb 2 oz (10.49kg) Chinook salmon caught in 1980 still hangs above the doorway in the Lake Bullen Merri Angling clubrooms, reminding visitors of how good the fishing can be in the crater lakes. Memories of up to 5,000 anglers lining the banks for the opening of the salmon season (back in the day when a closed season applied to lakes) are testament to how popular the Chinook salmon fisheries were. Chinook salmon are a special fish: they grow fast, they are ferocious competitors and they fight harder than trout. Word has it they are delicious to eat too. Bullen Merri and Purrumbete are revered as supporting exceptional salmon and trout fisheries and much of that has to do with the mighty Chinook or Quinnat salmon. Most fishers understand that fish stocking is not as simple as just throwing the fish in the water. Reliable water supply and water quality need to be assured along with ample food resources to support fish growth. Lake Bullen Merri and Purrumbete are highly productive and support large stocks of food for fish. But as their name suggests, they are within volcanic craters full of water and there are no connecting waters. The stocked fish are essentially confined to a giant fishbowl; therefore it is particularly important to get stocking numbers correct. Too many fish stocked may mean too many fish are competing for not enough food and space, resulting in stunted growth, such as seen in dense redfin populations. Too few fish stocked may result in large fish in good condition, but there may not be enough to satisfy the demand of all fishers. Then there is the added complexity of other species that may compete with each other.

To help answer the question about stocking numbers for the crater lakes, fisheries managers asked us to 1) explore all the available information that might describe the changes in the fisheries over time, and 2) identify stocking strategies to re-establish high quality Chinook salmon fisheries at Lakes Bullen Merri and Purrumbete. 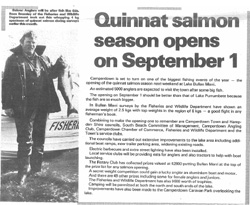 Fishery performance information was collated from 40 research reports and 25 years of The Victorian Fisheries Authority netting surveys and angler creel surveys between 1984 and 2003. This included information such as catch-rate, length, weight and condition of Chinook salmon. We were also fortunate to have the Lake Purrumbete and Camperdown Angling Clubs supply their club records, which included over 4000 weights of Chinook salmon caught since 1969 until 2009. All of this fishery performance information was statistically compared against 133 years of stocking records in the crater lakes and assessed for significant trends.

When we explored all the available information that might describe the changes in the fisheries over time, we found that both crater lakes had experienced significant environmental changes between the 1970s and present. This includes a steady decline in the water levels of both lakes, likely resulting in a reduction in food for stocked fish through a reduction in spawning ground for minnows such as smelt or galaxids. The crater lakes also had their own environmental issues which are likely to have affected and continue to affect the fisheries. For example; Lake Bullen Merri has experienced water quality issues resulting in 'fish kills' from the infamous sulphur burp, a hangover from volcanic times. Lake Purrumbete has experienced the boom and bust of redfin populations since at least 1976. The history suggests that the crater lakes are complex systems.

Despite large scale environmental changes occurring in the crater lakes, we found statistically significant trends between fish stocking and fishery performance. This suggests that, despite a variable environment, it is possible to use fish stocking to have a positive influence on fishery performance. In particular, the trends suggest that numbers of fish stocked in the past affect both the catch rate and the average weight of individual fish caught by anglers. For example:

This is logical, the more fish stocked in the water–the more survive and are caught by anglers. Stocking fewer fish decreases catch rates and may result in angler dissatisfaction. However, in 1996/97 when Chinook salmon stocking was at an all time high and catch-rates were better than ever, a survey at the time found anglers were unsatisfied with the fishing because the Chinook salmon they caught were too small.  This led us to uncover the second trend in our study results:

Although it makes sense that as less fish were stocked, the average weight of individual fish caught by anglers increased, 'density dependent growth' (changes in the rate at which fish grow depending on the density of fish they compete with) in reality is rarely detected due to natural variability in the environment. This finding suggests that more fish in the water were sharing the same amount of food and space and weren't growing as big as when fewer fish were stocked. This demonstrates that under the right circumstances, stocking less fish can actually improve your fishing through on average bigger fish and a greater potential for 'trophy' fish to be caught.

The third trend confirms what most anglers would suspect; that different fish species compete for food and space and this affects their growth. In this case, as less brown and rainbow trout were stocked, the average weight of individual Chinook salmon caught increased. This trend is supported by the past stocking conditions in which the crater lakes gained their reputation of being trophy Chinook salmon fisheries: the 1930-1940s and the late 1970s to early 1980s. The early Chinook salmon stocking between 1936 and 1946 was accompanied only by low numbers of stocked rainbow trout. Similarly, the trophy fishery performance of the late 1970s and early 1980s coincided with mostly Chinook salmon being stocked. Stocking fewer competing species in the past has resulted in excellent Chinook salmon fishing and suggests that numbers of other species also needs to be considered if we are to return Chinook salmon fishing in the crater lakes back to the glory days.

Anglers want to catch lots of fish and big ones – the use of angling club records in fisheries research here demonstrated that there is a clear balance between the catch rates and average weight of individual fish caught and the numbers of fish stocked. These results were presented to Fisheries Victoria managers and anglers to help develop a new four year trout and salmon stocking plan for the crater lakes based on the best scientific information available. The new stocking plan has since been implemented with Chinook salmon already restocked back into the crater lakes. It is hoped that these efforts will in future result in fishers driving towards south-western Victoria, to again experience the mighty Chinook salmon fisheries of the crater lakes!

For a full copy of the report please email taylor.hunt@vfa.vic.gov.au.