Preferred way to cite this publication:

Department of Primary Industries (2006). Guidelines for the Cadastral Survey of Victoria's Offshore Aquaculture Fisheries Reserves. Fisheries Victoria Report Series No. 30.Disclaimer: This publication may be of assistance to you, but the State of Victoria and its employees do not guarantee that the publication is without flaw or is wholly appropriate for your particular purposes and therefore disclaims all liability for an error, loss or other consequence which may arise from you relying on any information in this publication.

This publication cannot be used in court. Fishing laws change from time to time. It is your responsibility to ensure you are acting within the law. If you are in doubt seek independent legal advice. For other information contact the Customer Service Centre (telephone 136 186 or visit our website).

The purpose of this document is to provide guidelines for surveyors who undertake surveys of Crown leases within Victoria's offshore marine aquaculture fisheries reserves (AFRs). The guidelines are intended to ensure surveys are performed and documented to a standard acceptable to the Surveyor-General, the Registrar of Titles, Crown Land Management and The Victorian Fisheries Authority for the issue of Crown leases.

Fisheries Victoria division within the Department of Environment and Primary Industries is the management agency responsible for AFRs in Victoria. There are 10 offshore AFRs in Port Phillip, Western Port and Portland Bay. The 10 offshore AFRs contain mixtures of both currently farmed and new greenfield sites (see Appendices 2 and 3 for locations).

To facilitate the issue of a Crown lease for an area within an offshore AFR which is either farmed or proposed to be farmed, the lease area must be surveyed and marked by a licensed surveyor. A licensed surveyor means a person who is authorised to practice cadastral surveying in Victoria under the Surveying Act 2004. These guidelines describe the survey methods and the subsequent preparation of survey documentation necessary to achieve a standard acceptable for the issue of Crown leases in offshore AFRs.

For further information on the AFRs please go to the our website.

The surveys of areas within offshore AFRs are to be performed using Differential GPS (DGPS) equipment and techniques either in real-time or post processed. Real-time DGPS has the advantage of providing improved position accuracy instantaneously in the field and must be used for the purpose of marking offshore Crown lease areas. Post-processed DGPS, that is GPS data gathered in the field and post-processed with data from a known base station to improve their accuracy, can be employed instead of real-time DGPS where the purpose of the survey is to map the infrastructure of an existing marine farm to determine its position with respect to the lease boundaries.

The level of horizontal position accuracy required for these surveys is in the order of 1 to 2 metres at the 95% confidence level.

The table below shows the DGPS equipment specifications and user settings applicable to surveys of offshore Crown lease areas.

Both prior to and at the completion of an offshore DGPS survey of a Crown lease area, the DGPS system is to be verified on a shore-based permanent survey mark that is part of Victoria's Survey Control Network. A mark should be selected using the Survey Mark Enquiry Service (SMES) that is adjacent to the AFR of the lease, is suitable for GPS observations (ie. no obstructions to satellite signals) and has MGA94 Zone 54 or Zone 55, as appropriate, coordinates to 4th Order accuracy or better. A static occupation of the mark for a minimum of 60 position fixes at no less than 1 second each is required. The average of the static position fixes should accord with the published coordinates of the permanent survey mark to 1 – 2 metre accuracy in either real-time or once post-processed, as appropriate.

As Crown lease areas in offshore AFRs will be defined by coordinates on the Geocentric Datum of Australia 1994 (GDA94) datum, surveys of lease areas and any associated marine farm infrastructure will need to be performed and documented on the GDA94 datum. GDA94 is the official reference frame of Australia and is very close to, but not the same as, the World Geodetic System 1984 (WGS84) which is the default datum of all GPS receivers. The difference between GDA94 and WGS84 is in the order of 0.6 – 1.0 metre, which for most practical applications is insignificant.

In order to achieve maximum accuracy for DGPS surveys and to ensure compliance with GDA94, a reference (base) station whose coordinates are accurately known in GDA94, is to be used for the differential correction of the GPS data.

Unless otherwise specified by the Secretary DEPI or delegate, offshore Crown lease areas must be accurately marked at the corners with an orange-coloured surface marker buoy of not less than 30 cm in cross-section which is clearly, legibly and accurately marked with the Crown lease allotment number, Crown lease holder's name or company name, and contact number. The buoys are to be positioned and anchored at the designated corner coordinates of the lease using real-time DGPS to a horizontal position accuracy of 1 to 2 metres at the 95% confidence level.

In addition to marking their corners, existing aquaculture licence holders in the transition of their tenure to a Crown lease will need to ensure that their infrastructure is located within their area. A DGPS survey will need to be performed and documented to show that the infrastructure is positioned within the lease area to an allowable practical limit acceptable to The Victorian Fisheries Authority.

Fisheries Victoria may, at intervals it deems appropriate, request leaseholders to have their sites re-surveyed and the data provided to them for management purposes.

Each offshore Crown lease area will be described in a Plan of Crown Allotment (OPxxxxxx) prepared by the Office of Surveyor General Victoria in the form of the example shown in Appendix 4. The plan will be certified by the Surveyor-General and registered in the Central Plan Office to facilitate the issue of the Crown lease. Features of the Plan of Crown Allotment for the offshore lease include:

For both greenfield and existing sites within the AFRs, the corners of the lease are to be marked and a Plan of Survey certified by a licensed surveyor in the form of the example shown in Appendix 5 is to be prepared. If existing infrastructure is positioned within the site, the location of this infrastructure as a line feature is to be shown in the plan relative to the boundaries. Features of a Plan of Survey for a marine Crown Allotment include:

The Plan of Survey is to be accompanied by a digital file containing the results of the DGPS survey in MGA94 (E, N) coordinates. The digital file shall be in either .dwg, .dxf or .dgn format suitable for import into Autocad or Microstation.

These guidelines were commissioned by Fisheries Victoria, Department of Environment and Primary Industries.

Fisheries Victoria would like to thank Eddie Cichocki, Senior Surveyor, Office of Surveyor-General Victoria, Department of Environment and Primary Industries for the preparation of these guidelines.

The 25 ha BPAFR is located approximately 0.7 km offshore from Point Lillias and has the following coordinates:

The 25 ha BAFR is located in Beaumaris Bay approximately 0.64 km offshore from Table Rock Point and has the following coordinates:

The 315 ha CSAFR is located approximately 1.0 km offshore from the Bellarine Peninsula and has the following coordinates:

The 20 ha DAFR is located approximately 0.78 km offshore from Martha Point on the Mornington Peninsula and has the following coordinates:

The 440 ha FAFR is located in Flinders Bight approximately 0.3 km offshore from the township of Flinders on the Mornington Peninsula and has the following coordinates: GDA94 MGA94 Zone 55

*Note: E and F are bends on the western boundary of the reserve.

The 252 ha GPAFR is located approximately 0.6 km offshore from the Bellarine Peninsula and has the following coordinates:

The 200 ha KWAFR is located approximately 5 km offshore from the point at which the Little River enters Port Phillip and has the following coordinates:

The 150 ha MMAFR is located approximately 0.75 km offshore from Fossil Beach on the Mornington Peninsula and has the following coordinates:

The PCAFR is comprised of two 500 ha blocks located either side of the Pinnace Channel where it flows northwards from the Great Sands area. The blocks are referred to as the northern and southern blocks and the coordinates are as follows: Northern block

The 200 ha PAFR is located approximately 2.6 km offshore from Blacknose Point and has the following coordinates: 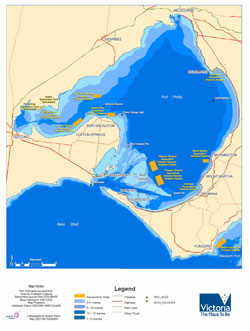 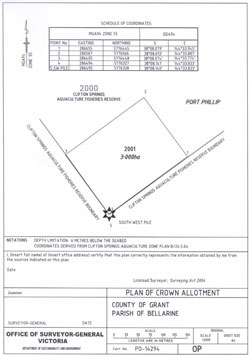