World demand for seafood products is growing dramatically, but wild capture fisheries cannot keep up. Aquaculture, the farming of fish and other aquatic organisms, could bridge the gap with high-value seafood from sustainable production systems. Aquaculture has the potential to create additional wealth for Victorian communities through diversification into sustainable new enterprises. Victoria currently accounts for less than six per cent of the value of national aquaculture production, and has potential to increase both inland and marine aquaculture.

Murray cod (Maccullochella peelii peelii), Australia's largest freshwater fish, is an icon species with significant commercial, recreational, conservation and cultural value. It is prized for its size and good eating qualities. However, overfishing and habitat loss and modification within the cod's natural range in the Murray-Darling Basin (MDB) have seen numbers dwindle since the early 1900s. The fish is listed under Victorian and Australian legislation designed to protect its conservation status, and wild populations have been supplemented since the early 1970s through State government restocking programs.

Murray cod has excellent aquaculture prospects and small quantities are already being sold into domestic and international markets. Genetic and reproduction technologies could be combined with conventional breeding programs to select faster-growing and more robust Murray cod with better disease resistance, boosting the productivity and profitability of aquaculture enterprises. With gains in production performance, reliability and profitability, the next five to 10 years could see the development of a new Murray cod farming sector in Victoria valued at more than $15 million a year.

Our challenge is to apply advanced genetic and reproduction technologies to high-value, inland species finfish to enhance production. Application of these technologies will also provide benefits for the management of native finfish biodiversity, particularly for species such as Murray cod which are declining in the wild and yet continue to be managed for multiple purposes (ie commercial, recreation, conservation).

Potential for the Murray cod aquaculture became apparent in the early 1990s. A major project was undertaken by scientists from the department and Deakin University to develop aquaculture techniques for this species (Ingram and De Silva 2004). Production technologies and water quality standards were developed and described, nutritional requirements were identified, and bio-economic and market analyses were undertaken. With the closure of commercial Murray cod fisheries across Australia and the expanding export trade of Murray cod into Asia, the Murray cod aquaculture industry has the potential to expand considerably in the near future. This study identified the establishment of a selective breeding program as a key factor in industry development.

Prior to Our Rural Landscape, which commenced in 2003, scientists at DPI Attwood developed an enriched DNA library for Murray cod and identified a small number of microsatellite markers. Microsatellite markers are short repetitive stretches of DNA that are inherited from one generation to the next. The 'High Value Aquaculture in Sustainable Rural Landscapes' project aims to develop and apply genetic and reproduction technologies to boost the profitability and sustainability of the newly emerging Murray cod aquaculture industry.

Selective breeding of Murray cod involves using genetic markers to identify broodfish that possess favourable production traits (such as rapid growth, robustness, disease resistance, etc.). These broodfish will be used to breed new elite strains of Murray cod suited to aquaculture in either recirculation systems, or in 'open water' systems in large irrigation dams which are now a feature of the landscape in northern Victorian horticultural regions. This enables value adding of the water through fish production, before application to grape, fruit, and vegetable crops.

Controlled reproduction technologies, including out-of-season spawning, chromosome-set manipulation, hybridisation and cryopreservation, will improve management and enhance the performance and value of selectively bred strains of Murray cod. In particular these technologies will allow production of sterile seedstock that will provide for biosecurity and protection of intellectual property (IP) investing in selective breeding. This component of the project will also be conducted on silver perch (Bidyanus bidyanus), another important aquaculture species in Australia which may also benefit from this type of research.

Developing such technology capabilities by government and industry in Victoria will provide very clear triple bottom line benefits. These are economic benefits from the development of the Murray cod aquaculture industry, environmental benefits through development of DNA markers to help understand biodiversity in Murray cod, and social, community and economic benefits associated with sustaining stocking of Murray cod for recreational fishing and enhanced genetic management of wild populations.

The project being undertaken by DPI researchers at the Attwood and Snobs Creek centres is part of Our Rural Landscape, a DPI initiative worth $50 million over four years.

The project draws on DPI capabilities and research experience in aquaculture and animal genetics. The Attwood group is conducting animal genetics and genomics research for the dairy, beef, sheep, pork and abalone industries; it has built up an impressive collection of genetic material as well as expertise in molecular genetics and bioinformatics. The Snobs Creek group has a long history of fisheries and aquaculture research, and has played a key role in the development of captive breeding and production techniques for Murray cod and other native fish species. An industry survey indicated that important traits of interest to aquaculture of Murray cod included fast growth, hardiness (eg stress resistance and disease resistance) and survival during production, while at market, fish size, skin colour and flesh texture (amongst others) where important.

DPI researchers have identified over 100 new microsatellite markers, which will be used to determine regions of the Murray cod genome associated with genes that might be useful for selecting fish for aquaculture production. These markers are also being used to determine spawning habits of captive Murray cod and to identify genetic diversity and genetic structure in historical and current populations across the Murray-Darling Basin. Researchers have also shown that many of these markers will have similar applications in other percichthyid species as, 79-94% of these cross-amplify in other cod (Maccullochella) species and 18-38% in the bass and perch (Macquaria) species.

In order to link the microsatellite markers to the aquaculture traits of interest, fish from four families of Murray cod are being communally reared to market size. At eight months of age these fish were implanted with microchips to identify individuals, and a tissue sample was collected from each fish for DNA analysis. A number of important aquaculture traits are regularly measured in these fish. These traits include growth, survival, fish condition, fat content and skin colour. Researchers have found that both growth and survival were quite variable within and between families. Fish from one family in particular (Sp5) grew faster and more survived than in the other three families. Researchers also observed considerable differences in fish condition and skin colour. These preliminary results indicate strong potential for selection of these traits in a breeding program for Murray cod. Once the microsatellite markers are linked to these aquaculture traits, a 'proof-of-concept' project will need to be undertaken to evaluate the performance of selectively bred strains of Murray cod.

Research into the controlled reproduction of Murray cod is being conducted on a group of broodfish held in a recirculating aquaculture system under artificial conditions. These broodfish have been successfully spawned outside their normal breeding season by manipulating the temperature and light regimes in the recirculating aquaculture system and hormone-induction of ovulation. In addition, silver perch broodfish also held in the system have been successfully induced to spawn 'out-of-season' using the same methods. Controlled breeding of these species will increases the flexibility of selective breeding programs and enable greater control over fish matings and seedstock production.

An important aspect of the project involves exploring options for producing sexually benign progeny (sterile or infertile). While such research is important in terms of protecting intellectual property and affording enhanced performance in aquaculture, production of sterile stock will reduce or eliminate the reproductive potential of progeny so that, in the event of escape, the potential risk of genetic impact on wild stocks is minimised. William Bravington, a DPI researcher who is currently studying for his PhD through Flinders University, is studying options to improve performance and to induce sterility in Murray cod through techniques such as chromosome-set manipuilation and inter-specific hybridisation.

Triploid fish, fish with three sets of chromosomes, are desirable in aquaculture because they are generally sterile, and thus use less energy in the development of gonads, which can result in faster growth. Triploidy is also used as a means of genetic containment by reducing unwanted reproduction. Researchers have been able to induce triploidy in both Murray cod and silver perch. Experiments are now being conducted to refine techniques and assess the aquaculture performance of triploids.

Hybrids are used in aquaculture to increase growth (hybrid vigour), transfer or combine desirable traits between species and reduce unwanted reproduction through production of sterile offspring. Hybridisation trials have been conducted using milt from trout cod. Murray cod x trout cod hybrids, though rare, occur naturally in the Murray River where both species occur. A small number of hybrids are currently being reared to evaluate aquaculture performance (eg growth and environmental tolerance) and ultimately to determine their fertility.

In collaboration with the Monash Institute of Medical Research, Monash University and Cryologic Ltd., staff have been investigating options for cryopreserving sperm as a means of cost-effectively storing genetically unique material indefinitely for conservation and selective breeding programs. As a result of this research we are now able to successfully freeze Murray cod sperm in liquid nitrogen and then re-animate it after thawing. Trials to test thawed sperm in breeding Murray cod are now planned. 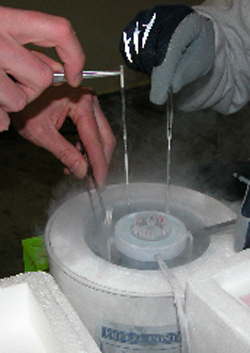 Freezing sperm of Murray cod for later use

This project will provide the genetic and controlled reproduction tools for future commercial selection and production of Murray cod to supply local and international markets with high value fish. Although no selective breeding will take place in the current project, it is anticipated that the results from this project will represent the first stage in the production of new elite strains of Murray cod for a rapidly developing industry in rural Victoria. The team identified over 100 new microsatellite markers for Murray cod, and has established a genetically diverse population of captive Murray cod that, once mature, will be the broodfish in a selective breeding program. Once the microsatellite markers have been linked to favourable aquaculture traits, a 'proof-of-concept' project will need to be undertaken to evaluate the performance of selectively bred strains of Murray cod. This breeding program will be complemented by use of controlled reproduction techniques to produce high performing seedstock on demand.

Another result of this project has been the development of new capabilities in fish genetics and genomics within DPI. These capabilities will be applied to other aquatic species for aquaculture (eg selective breeding of mussels, Mytilus spp.), sustainable fisheries management (development of genetically sound stock enhancement practices) and aquatic species conservation (eg genetic structure of stocked populations of the endangered trout cod).