The Victorian angler diary program has been operating in Anderson Inlet since 2005/06 and is currently funded by the Recreational Fishing Grants Program. Volunteer anglers have been contributing detailed information about their fishing trips including their time spent fishing, fishing location,species targeted and caught, fish lengths, number of rods and baits and hook type/sizes used.

Information collected by these volunteer anglers improves our understanding of fish stocks in Anderson Inlet in particular estuary perch by providing information on: Volunteer anglers contribute to the angler diary program as either a 'research' angler or a 'general' angler. General anglers record information from their normal fishing trips. Research anglers target key species and if necessary alter their fishing techniques to catch the largest possible size range of the targeted species, including undersize fish.

The catch rates (fish per angler hour) of estuary perch in 2010/11 were similar to the previous year and below the average over the past 5 years. On average, diary anglers caught two estuary perch every hour while fishing in the Anderson Inlet during 2010/11.

Health of the fishery

Data collected by angler diarists in Anderson Inlet suggest that while the population of estuary perch is variable from year to year, they are resilient, in a healthy condition, and showing no evidence of a persistent decline in abundance.

A longer time series of angler diary information will help to better understand the stock status of this species.

Profile of the fishery Over the past two years: 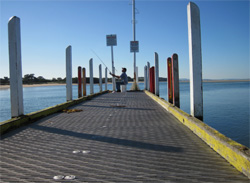