Giant spider crabs - Leptomithrax gaimardii – are the largest growing spider crabs in Victoria’s waters. They can reach 16 cm across their carapace or shell, and 70 cm across their legs – although most are not this big. Giant spider crabs are scavengers, eating a range of different types of food on or near the seafloor. They are usually orange to red-brown in colour, and can have seaweed, sponges or sea squirts attached to their body.

Detailed keys are available to identify giant spider crabs. There is another common spider crab - ribbed spider crab or  Leptomithrax sternocostulatus – which looks similar and lives in similar habitats but is more camouflaged and only grows to about a third the size. Ribbed spider crabs also have shorter walking legs which do not extend much longer than their carapace. 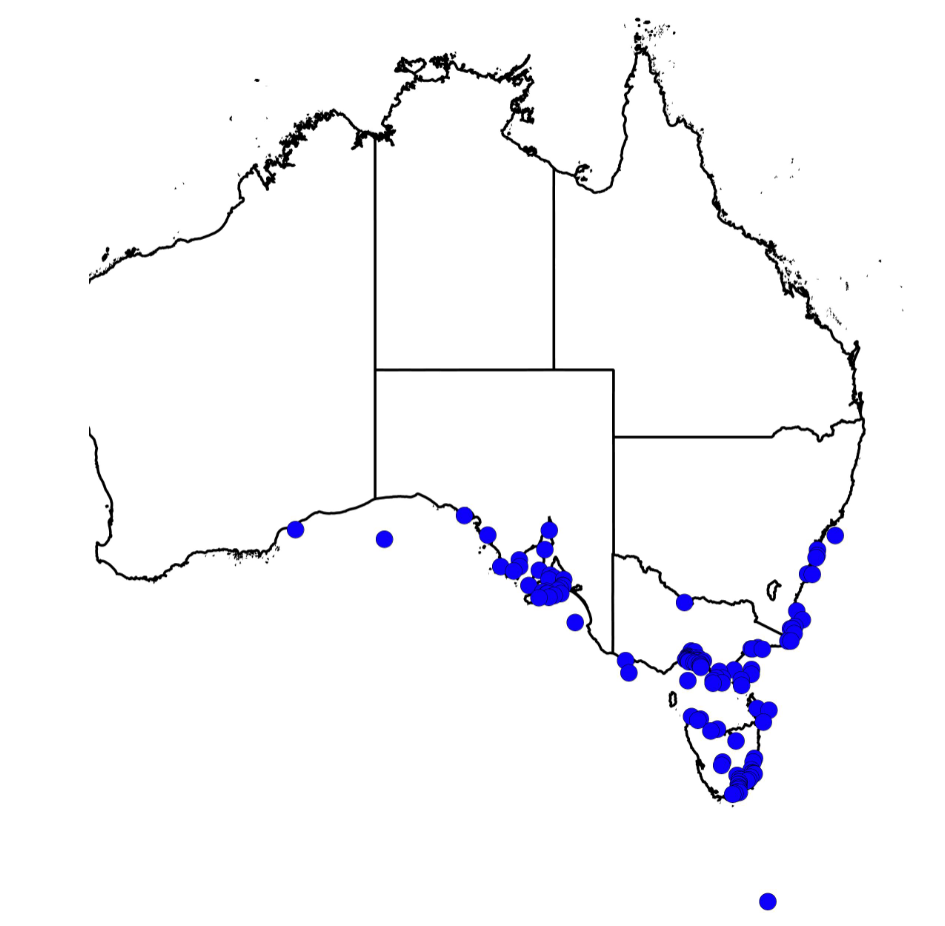 According to Australia’s national biodiversity database, giant spider crabs are widely distributed in south-eastern Australian marine waters. They are found in seaweed, reef and sand habitats.

The Museum of Victoria describes giant spider crabs as common in shallow water but found down to 820m deep.

Like other crabs, giant spider crabs have a complicated life cycle. After mating, the female crab protects the fertilized eggs under her abdomen. The eggs hatch as tiny larvae (‘zoea’), which swim and grow in the plankton until they are ready to settle out on the seafloor as miniature crabs.

our marine environment, and the behaviour of giant spider crabs, at these depths of the sea which are hard to explore by scuba.

Dense giant spider crab aggregations have been reported in a number of locations in Victoria’s nearshore waters, in Gippsland Lakes and further afield in Tasmania and South Australia. Aggregations seem to return to some shallow water areas year after year but can then for some reason move on.

Scientists currently believe that the aggregations are a way for giant spider crabs to find ‘safety in numbers’ during moulting, when the crabs’ soft shells make them more vulnerable to marine predators. An earlier theory that crabs are aggregating to breed has not been supported by diver observations so far.

The Blairgowrie / Rye crab aggregation is a wonderful Victorian natural asset. It is valued and appreciated by different members of our community for different reasons. Mutual respect  and understanding – alongside monitoring,  management, education and enforcement – will continue to be critical to persistence and enjoyment of this natural phenomenon into the future.