Your fishing licence fees have recently funded a major research project on the movement behaviour of snapper. In November 2011, scientists from the Victorian Fisheries Authority began tagging snapper in Port Phillip Bay with electronic transmitters, called "acoustic tags". These tags, which are surgically implanted into the fish's stomach cavity, emit unique acoustic signals that are detected by arrays of strategically located monitors called 'listening stations' moored on the seabed. The listening stations detect the presence of the transmitter tags within a detection radius of 300-400 m and log data on the dates, times, and unique tag identification number of each fish. By December 2013 approximately 150 snapper had been tagged in Port Phillip Bay across a size range of 22-87 cm total length. The movements of these fish were monitored until January 2015. Inevitably some fish were recaptured, some died or were eaten by something bigger shortly after release, and some simply didn't get detected by listening stations, but overall,information was obtained from 85 adult (fish > 35 cm) and 57 juvenile (fish < 35 cm) snapper. These fish recorded a staggering 700,000+ detections across the array of listening stations in Port Phillip Bay and across the Port Phillip Heads. Researchers have now completed analysis of all this information and the detailed results can be found in the project report:

The study has increased our understanding of: 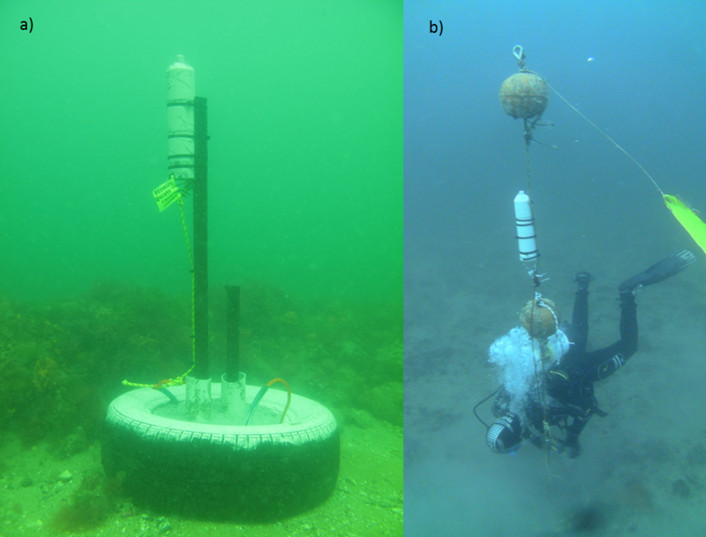 Underwater listening stations identify individual fish as they move within 400 m of them.

This is the first time snapper have been studied with acoustic tags in Victoria. It has opened up a window to their movement behaviour with some fascinating results, including the first unequivocal demonstrations of individual adult snapper making repeat migrations between the bay and coastal waters over multiple years. Overall the results have shown that snapper have a highly systematic pattern of annual migration into and out of the bay that is cued to seasonal water temperature patterns that optimise the survival of their offspring. The adults aggregate during November in the Carrum Bight to Hobsons Bay region in the plume of the Yarra River, and within a large eddy current. This eddy retains the eggs and larvae in this ideal feeding environment. Both adult and juvenile snapper showed remarkable navigation skills, being able to repeatedly relocate specific location such as artificial reefs within the bay, and for adults, finding their way to and from the bay, often arriving only days apart each year.

When do adult snapper arrive to Port Phillip Bay during each year's spawning migrations?

When do adult snapper leave Port Phillip Bay after each year's spawning season?

How do these migration patterns relate to the bay's water temperature?

Do 'individual' adult snapper come and go each year?

How do they behave once in the bay?

What did the Pinkies do?

Some of the tagged snapper are still out there, if you find an acoustic tag (left) inside a snapper, or an external yellow tag (right), please measure the fish, note the location and data, keep the tag and call 52580288