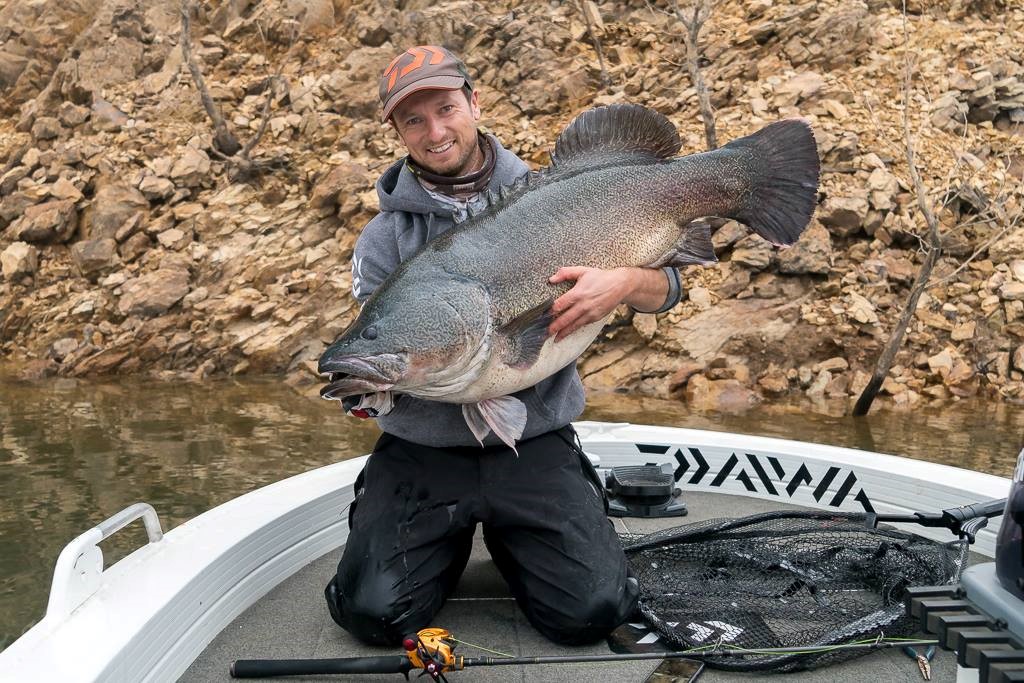 How, where and when was the survey done?

What did we find out?

Increase in numbers of Murray cod

Increase in size of Murray cod

In February 2019 a Murray cod population survey of Lake Eildon was conducted, finding:

These findings show that stocking of Lake Eildon with Murray cod is resulting in more Murray cod for anglers to catch and those stocked fish are growing to larger sizes, including trophy fish over 1 meter.

The survey also tagged and released 125 Murray cod so that anglers can report recaptures and through citizen science we can understand growth and movement of Murray cod in Lake Eildon.

Lake Eildon is now one of Victoria’s premier native fisheries. Since 1990, almost 3 million Murray cod and 3.4 million golden perch have been stocked in Lake Eildon to enhance recreational fishing (Figure 1).

Recreational fishers are reporting good catches of Murray cod and many anglers are travelling to fish Eildon from interstate. Lake Eildon is now rivalling the best Murray cod fisheries for anglers to visit alongside the Ovens River, Lake Mulwala and Copeton Dam.

The last fish population survey of Lake Eildon was conducted in 2014 and found large numbers of Murray cod, of which 99.6% were from stocking. Murray cod were found to have exceptional growth rates, with some fish reaching 60cm at three years old.

Since 2014, a further 1 million Murray cod have been stocked into Lake Eildon.

Considering the substantial investment at Lake Eildon through fish stocking and the last fish population survey was conducted five years ago, it’s timely to reassess the health of the Murray cod population and success of fish stocking. As a result, the 2019 survey aimed to: 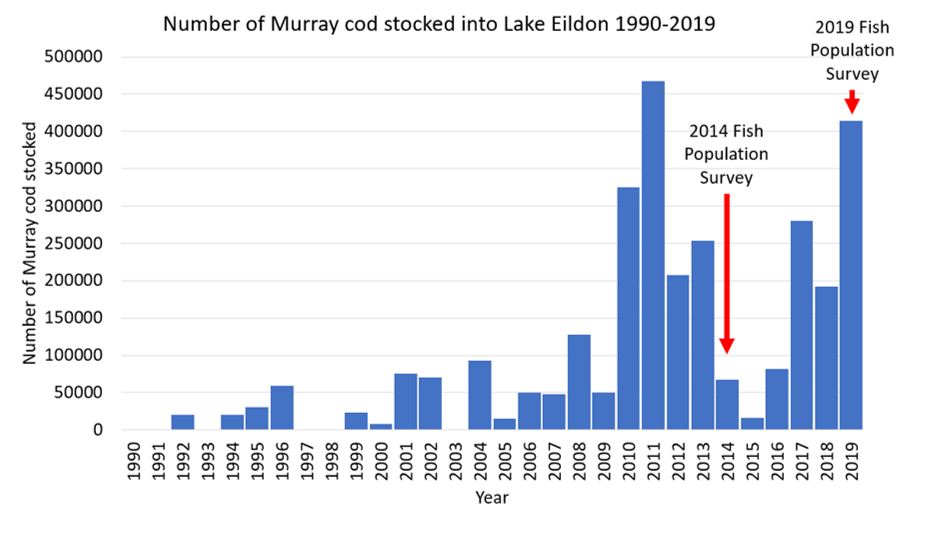 How, where and when was the survey done?

The Victorian Fisheries Authority engaged Arthur Rylah Institute researchers to repeat the same survey methods and locations from the 2014 fish population survey in 2019. This meant conducting boat-based electrofishing (Figure 2 and 3) at key sites in the southern portion of Lake Eildon including the Dam Wall, Jerusalem Creek Arm, Big River Arm and Goulburn Arm (Figure 4). Electrofishing is a standard fisheries sampling technique and our most effective for catching Murray cod. Fish are stunned, brought onboard, measured, weighed, tagged if necessary and released unharmed. Figure 3. Boat-based electrofishing along the dam wall at Lake Eildon. 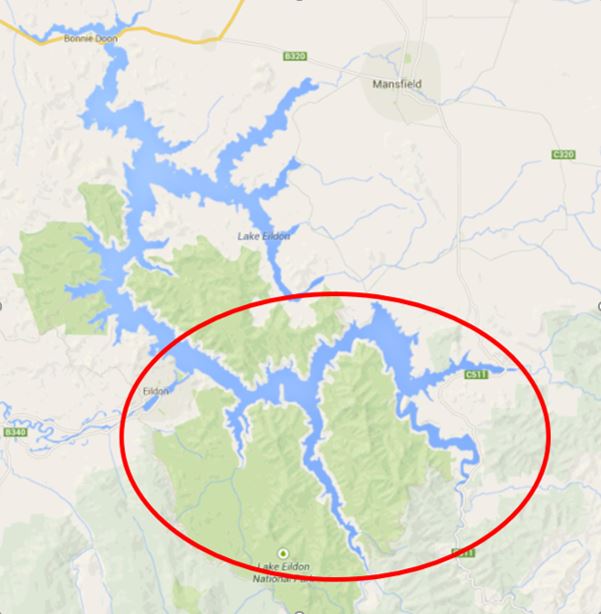 The survey took six days and night and all caught fish were measured, weighed and released unharmed (Figures 5-8). All Murray cod caught over 35cm in length were tagged for anglers to report recaptures of in future.

Figure 5. Measuring and recording Murray cod caught in the survey. Figure 6. Data collection in the survey occurred through the night. 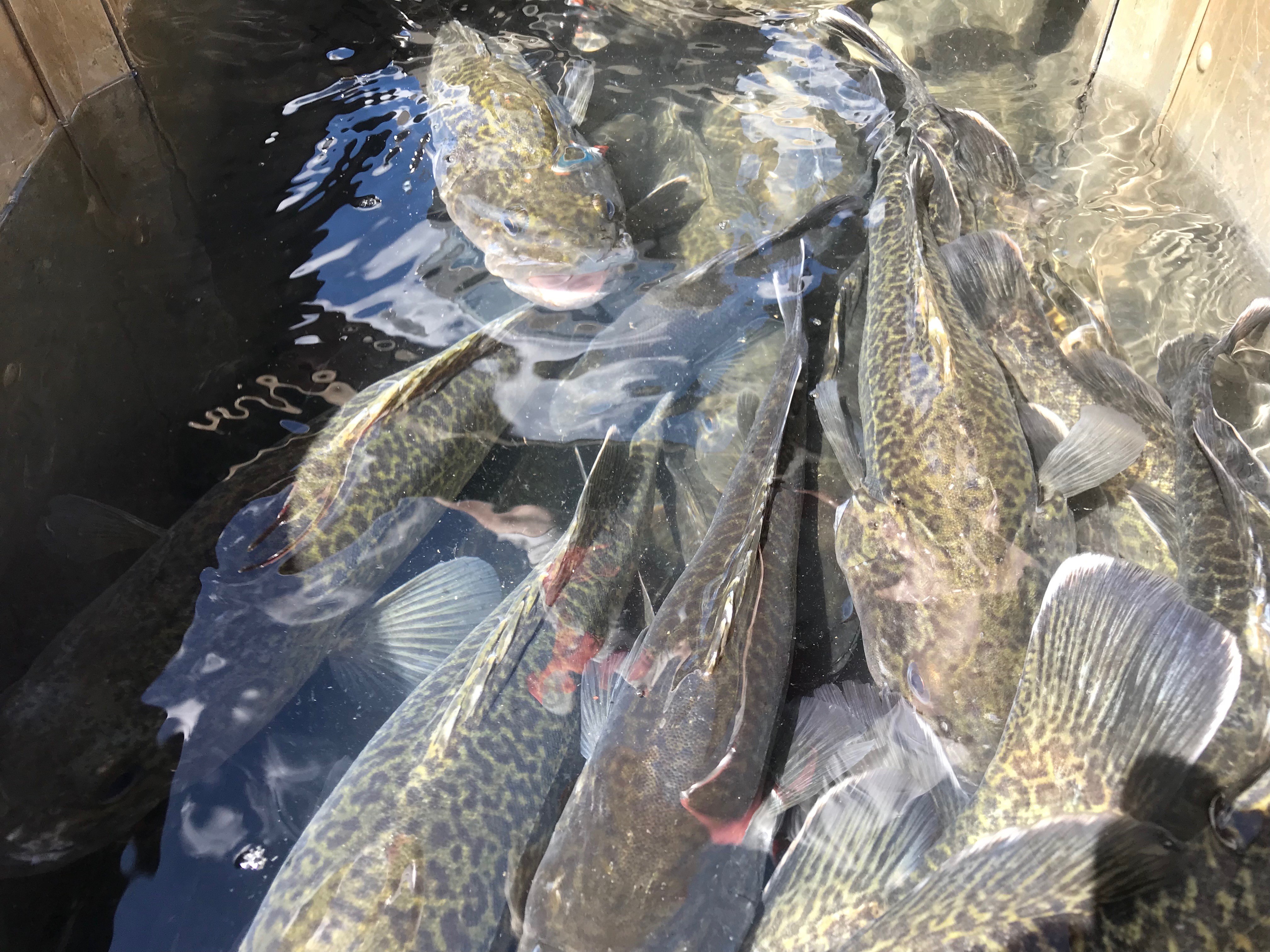 Figure 7. Murray cod in the electrofishing live well about to be measured, weighed, tagged and released. Figure 8. All fish caught in the survey were released unharmed.

What did we find out?

The survey found large numbers of Murray cod and golden perch are present at Lake Eildon, indicating stocking efforts have been successful at building a strong population of native fish for anglers to catch.

The numbers of Murray cod caught in the 2019 were substantially higher than in 2014 indicating that more stocked fish are surviving are recruiting into the fishery at Lake Eildon.

The sizes of Murray cod caught in the 2019 survey were larger than in 2014 indicating that stocked Murray cod are finding ample food resources to grow to maturity.

More specifically, 380 Murray cod were caught, measured and released in the survey. Fish ranged from newly stocked 4cm fingerlings (Figure 9) to mature trophy fish up to 123cm (Figure 10) and over 32kg (70lb). 59 golden perch were caught as bycatch, measured and released in the survey. Fish ranged between 3cm and 56cm or 4kg (Figure 11).

Figure 11. Golden perch to 56cm or 4kg were caught in the survey

When comparing the numbers and sizes of Murray cod caught in the 2019 survey with the 2014 survey, only standardised comparable electrofishing data was used.

Increase in numbers of Murray cod

Table 1. Summary of comparable electrofishing survey result between 2014 and 2019.

Increase in size of Murray cod The survey also found larger numbers of trophy Murray cod including 29 fish over 75cm and seven fish over 1 metre (Figures 13-15). 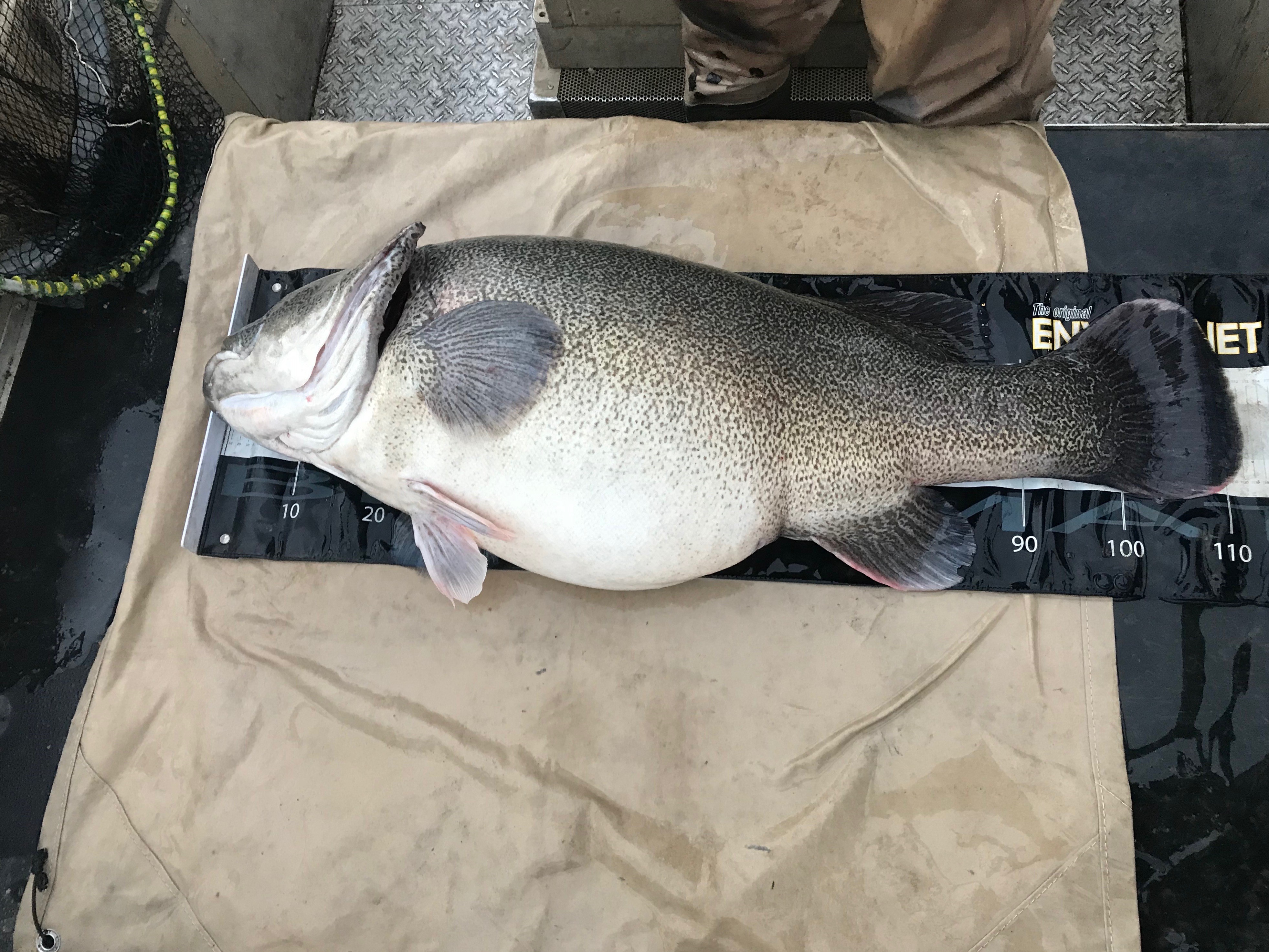 Figure 14. Trophy Murray cod to 123cm Murray cod were caught in the survey 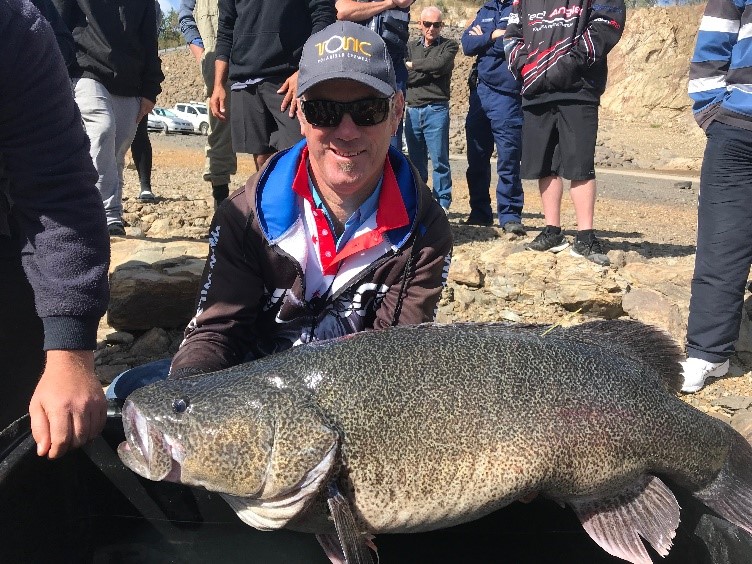 Figure 15. Paul Thomas at the community demonstration event with one of the Murray cod caught in the survey.

125 Murray cod were tagged and released in the survey so that anglers can report any recaptures and we can understand growth and movement of Murray cod through citizen science.

Already over 10 tagged Murray cod have been reported by anglers (Figure 16).

Anglers are encouraged to report any tagged Murray cod by calling 1800 134 093. If you prefer, you do not need to reveal your specific fishing location. Anglers reporting a tagged Murray cod will receive a lure as a reward. The survey included a community demonstration event where recreational fishers and members of the community were invited to hear about the work and see electrofishing and fish tagging being conducted. Over 50 people attended the event, and which was a fantastic success (Figures 16-18). Figure 17. Members of the community hearing about Murray cod surveys of Lake Eildon. 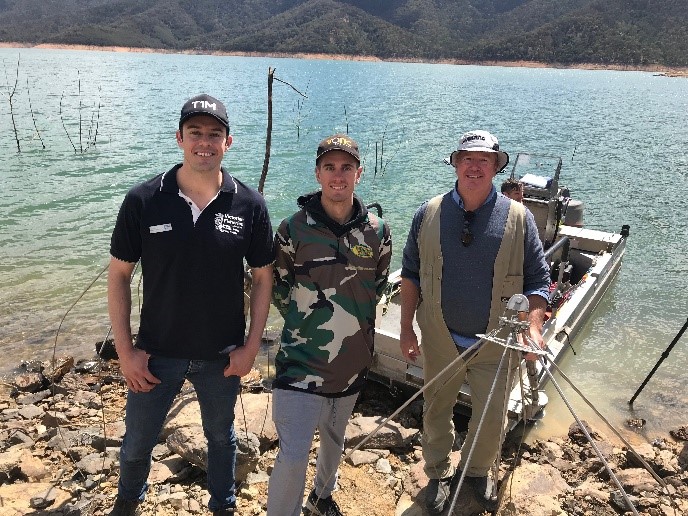 Two videos have also been created publicising the survey of Lake Eildon and the fishery:

These survey results are also being presented at various angling clubs and competitions including the Lake Eildon Fishing Challenge.

The Victorian Fisheries Authority is interested to hear from anglers on other projects which could improve fishing in Victoria.

One suggestion for Murray cod fishing is to telemetry tag and track the movements and habitat use of Murray cod in Lake Eildon and share these results with anglers to help them improve targeting and catch rates.

If you are interested in this idea or have another suggestion, please email taylor.hunt@vfa.vic.gov.au