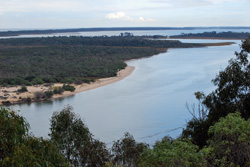 As part of the State Government's Target One Million election commitments, it pledged to 'ban netting at river mouths in the Gippsland Lakes'. The river mouth exclusions are designed to protect a sufficient area around the mouth of the river to allow migratory fish in the Gippsland Lakes to freely disperse when they pass between the lakes and rivers.

Public consultation was led by Craig Ingram, Coordinator of the Target One Million plan for recreational fishing, which aims to grow participation in Victoria to one million anglers by 2020 and get more people fishing, more often.

Mr Ingram presented his report to the government  and made recommendations on the best way forward to deliver this election commitment.

In August 2016, the Minister accepted the report and all its recommendations.

The report and consultation

Mr Ingram received a total of 50 submissions from stakeholders and interested members of the community. The submissions ranged from detailed analyses of the fishery with recommendations to simple emails outlining a particular position. Extensive direct consultation was also undertaken with all licence holders and a wide range of stakeholders.

The following are the outcomes outlined in the report's recommendations:

The full report is available here:

The recommendations and outcomes of the report will now be implemented through changes to the Fisheries Regulations 2009, expected in 2017.

The following document provides an overview of the Gippsland Lakes fishery: