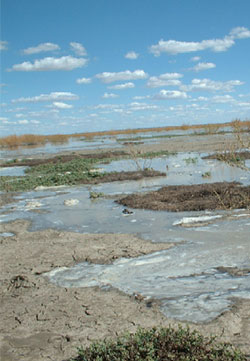 The golden perch (Macquaria ambigua Richardson 1845) is an iconic freshwater fish native to Australia's Murray-Darling Basin. Like many other native fishes, golden perch have suffered declines in abundance and range since European settlement as a result of overfishing, habitat destruction, and dams that impede migration and regulate flows of the Murray-Darling river system. For more than four decades it has been widely considered that flow pulses and floods are proximate stimuli for spawning, and that floods enhance recruitment to sustain golden perch populations. It has, however, been shown recently that spawning and recruitment can occur in the absence of these conditions, that strongest recruitment events can occur outside of flood periods, and that both spawning and recruitment can occur during periods of low and even zero flows – at least in the dryland rivers of the Basin's arid zones.

The reproductive ecology of golden perch was examined in the Darling River throughout 2004-2006. During this period, temporal patterns of oöcyte maturity were examined to reveal that spawning could occur at almost any time of the year in the Darling River system. Distinct differences were also examined between the stages of oöcyte maturity observed for mature-aged females at various locations along a broad spatial gradient between Wilcannia and Menindee (~300 km), to reveal a prevailing spatial pattern in the occurrence of 'ripe', 'transitional' and 'resting' golden perch females within this reach of the Darling River.

In order to elucidate the influence of flow upon the ecology of spawning, patterns in oöcyte development, physiological indicators of spawning, and the presence/absence and daily age of larvae and early juveniles were examined across periods of zero flow, low flows and serial flow pulses in the Darling River during 2004-2006. This examination revealed that in the Darling River, golden perch spawning occurred only in conjunction with acute flow pulse events that exhibited rapidly increasing and decreasing rates of daily discharge in the river, despite the potential for spawning to occur at any time of the year throughout the range of the flow and thermal conditions examined.

Following spawning in the Darling River in response to a flood pulse during January 2004, the growth and mortality rates of larvae and early juveniles were tracked for the next 12 months in both the main channel habitat of the Darling River, and in two large ephemeral deflation basin lakes, or 'floodplain lakes', that were inundated by the 2004 flood pulse in the Darling River. From this spawning event, it was observed that transition throughout the larval stages occurred in the main river channel habitat, as suitable densities of zooplankton prey occurred within the main river channel to support rapid growth, high survival and transition of golden perch larvae through metamorphosis in this location. Larval and early juvenile drift in the main channel of the Darling River was determined to occur for at least 38 days from spawning, in conjunction with the January 2004 flood pulse, enabling early juveniles to colonise and settle within the two recently inundated floodplain lakes examined during the study. Between March 2004 and January 2005, zooplankton densities and water temperature were compared in the floodplain lakes and the main river channel and these were significantly and consistently higher on the floodplain as compared to the main river channel study sites. This difference was associated with YOY golden perch growing more rapidly and experiencing a relatively lower rate of mortality in the floodplain lakes than they did in the adjacent main river channel. Upon reconnection of the lakes and the river by a follow-up flood pulse following the winter period, a shift in relative abundance of young-of-year occurred between the lakes and the river, and this was considered to represent migration of young-of-year from the floodplain nursery grounds back to the permanent riverine habitat.

The determination of a protracted breeding period, together with the distinct spatial patterns in reproductive development and an acute flow-stimulated spawning response, together with the role of the floodplain lakes as nursery areas, enabled refinement of a life history model for golden perch. The utility of the life history model to predict the specific effects of river regulation upon key life cycle events for golden perch is discussed in the context of a range of river regulation scenarios in the Murray-Darling river system. Also examined are effects of river regulation upon specific aspects of golden perch life history in the Murray-Darling Basin. New information linked within the conceptual model of the life history tactics of golden perch provides a basis for improved management of this regulated river system for maintenance of resilient and sustainable populations.

Clayton P. Sharpe Bachelor of Science (Hons.)
Griffith School of Environment Faculty of Science, Environment, Engineering and Technology Griffith University
Submitted in fulfilment of the requirements of the degree of Doctor of Philosophy March 2011

For a copy of the Full Report please email: chris.padovani@vfa.vic.gov.au