Triploid brown trout for roach control and a trophy fishery

If you would like to receive this information/publication in an accessible format (such as large print or audio) please call the Customer Service Centre on: 136 186, TTY: 1800 122 969, or email customer.service@ecodev.vic.gov.au

Roach (Rutilus rutilus), are an exotic species that have become established in several Victorian water storages and streams. Roach have the potential to multiply and dominate the fishery biomass, leading to fewer resources for other biota. The population density of roach is an emerging issue in the Coliban water storages including Lauriston Reservoir, where the predominant recreational fishery is for brown trout (Salmo trutta).  At present the recreational fisheries in these storages are relatively poor although in the past they have provided worthwhile returns for trout anglers.

Whilst roach populations are undesirable and not conducive to good fishing they may provide an opportunity to trial a natural control option as well as offering a trophy trout resource in the region.  One option could be the use of triploid brown trout. Triploids are a genetic variant where each cell of the animal contains three sets of genetic material (ie. chromosomes) instead of the usual two sets. Triploid rainbow trout (Onchorhynchus mykiss) are routinely used in aquaculture around the world. Triploid trout have the advantage that they do not breed and continue to grow after they have reached reproductive age. Using triploid brown trout to stock Lauriston reservoir could lead to the establishment of a quality large brown trout fishery whilst at the same time providing a level of control on a pest fish population.

This project intended to trial the introduction of triploid trout to a lake with a large roach population to investigate the potential of these trout to exert some predatory pressure on the roach population. The presence of a large predator may control the numbers of roach as well as create a recreational fishery.

The overall approach of the project involved the production of triploid trout and then monitoring the performance of these fish in both the recreational fishery and roach control contexts.

The project investigated the dietary link between trout and the roach stocks, evaluated the success of triploid-production attempts, monitored the length frequency of the existing roach population and assessed the performance of the stocked triploid brown trout.

Monitoring the impact of triploid trout on the roach population requires some means of linking the triploid trout to the roach. Stable isotope analysis uses carbon and nitrogen to determine energy and nutrient pathways and therefore is useful to determine aquatic system food webs. The approach has been used for many years and remains the principal method to identify nutrient pathways and can indicate important predator/prey associations. Determining the Lauriston reservoir food web would therefore assist in assessing the food source of trout in general and possibly identify roach as the primary food source of the triploid trout. The objective of using stable isotope analysis was to establish an actual dietary link between the triploid trout and roach.

Alternative techniques to investigate predator/prey interactions were considered. However, methods such as gut-contents analysis are expensive to conduct due to the increased sampling and sample identification required, they can be problematic in food identification (e.g. identifying roach in digested food) and generally require large numbers of samples and therefore need to kill many fish.  Gut flushing of live fish to obtain samples of gut contents, was also not a viable alternative as it is difficult to perform on small fish. Neither method was considered as viable for this project given constraints on the number of triploid fish produced and the commitment to allow the stocked fish to grow in the reservoir and not be sacrificed for gut-content analysis.

While regular fish population surveys may have indicated changes in abundance of various roach length-classes within the Lauriston Reservoir, this would not have indicated any direct links between the triploid trout and roach population. Abundance changes observed would not necessarily be due to interaction between roach and triploid trout. The observations could be coincidental or related to a wide range of other factors (e.g. climate, gear-related size selectivity, other predators such as redfin, etc) and therefore any deductions could only be speculative.

To undertake the analysis, aquatic samples including fish, crustaceans and plant material were collected from Lauriston Reservoir. Samples of diploid and triploid brown trout from Snobs Creek hatchery were also obtained prior to stocking. The samples were dried, ground to powder and sent to a laboratory at Edith Cowan University (WA) for carbon and nitrogen isotope analysis.

The experimental stocking strategy was to have equal numbers of triploid and diploid brown trout stocked into Lauriston Reservoir to assess the performance of both trout "types" against each other.  For the study, it was important that the fish stocked into the lake were actually triploid so the fish were required to be assessed prior to stocking. The aim of this ploidy evaluation component of the project was to assess successful induction of triploidy in brown trout destined for release into Lauriston Reservoir.

Will Bravington, a PhD student working with Brett Ingram (Fisheries Research Branch, Fisheries Victoria) evaluated the ploidy of samples by measuring red blood cells under a microscope.  Triploid cells have more DNA and therefore have a larger nucleus.  Triploid fish can therefore be identified from diploid fish by comparing the size of the cell nuclei. Triploid control fish were obtained from a commercial provider.

Regular sampling of the lake had dual objectives; to obtain information on the roach population as well as assess the growth and survival of the triploid and diploid trout.

All fish stocked into Lauriston for this project were fin clipped for identification. This was conducted by the fish production section of FV prior to release.

Mesh nets were used in the preliminary scoping-sample and electrofishing was used thereafter to sample the lake for trout and roach. Electrofishing was used because it is a non-destructive method and sampled fish (particularly trout) could be returned alive to the reservoir.  Fish samples were made at the lake on five occasions; August 2006, July 2007, December 2007, June 2008 and August 2008.

In stable isotope analysis, ratios of carbon (13C) and nitrogen (15N) in the sample organism are plotted to determine where the sample sits in relation to the primary food source and trophic level of the organism. High nitrogen ratios indicate a higher trophic level and similarity in carbon ratios between predator and prey indicates the food source. There were at least four clearly defined trophic levels present in the reservoir (Figure 1). The top level consisted of large brown trout and large redfin. The next trophic level consisted of smaller brown trout, redfin and roach and also carp, galaxias, and bigheaded gudgeon. These two fish trophic levels were above two others comprising of large invertebrates (e.g. yabbys and shrimps) and then aquatic vegetation. This indicates that large trout and large redfin eat roach, smaller trout, gudgeons etc. The close clumping of the ratios in the second-highest trophic group indicates dietary overlap among these species. Roach were not isolated as an independent group. The Lauriston Reservoir isotope analysis exhibited a narrow carbon range and dietary overlap between species at each trophic level; and this narrow carbon range makes it difficult to discern the actual energy path through the system with sufficient resolution to identify the food sources of each species. Therefore it is not possible to detect a unique link between trout and roach.

Trout do eat roach but the large fish also eat any of the prey in the lower trophic level. If the triploid trout continued to survive and grow in the storage and eat solely roach, the narrow range of carbon sources encompassing all the small fish and invertebrates  may make it difficult to prove using stable isotopes. The isotope method was found to be unsuitable for this project.

Triploidy was not successfully induced in the trout produced in 2006. The techniques used by the hatchery included a mixture of pressure and heat shocked fish and these two "batches" of fish were subsequently mixed together. The results indicated that triploidy from both was low or nil. No stocking could be made in 2007 because of the triploidy failure.

Analysis indicated that triploid brown trout were successfully produced in 2007 and these fish were subsequently released into the reservoir in June 2008. No triploid trout were supplied for assessment by the fish production section from the 2008 breeding season.

The results of the sampling indicated that the roach population was not abundant and the fish were difficult to sample in large numbers using electrofishing. The initial netting sampling of the roach population indicated a range of different sized roach were present in the lake. The subsequent electrofishing surveys only sampled two size frequencies (Figure 2).  It is not known if the difference in the length frequencies between netting and electrofishing samples was a product of sampling bias or was an impact of the stocked brown trout. Despite the considerable sampling effort, the number of roach returned from the surveys was not suitable to make any decisive comments on the impact from the stocking of brown trout.

The fish surveys indicate that at the end of 2008 there was only one cohort of verified triploid brown trout present in Lauriston Reservoir (Table 2). 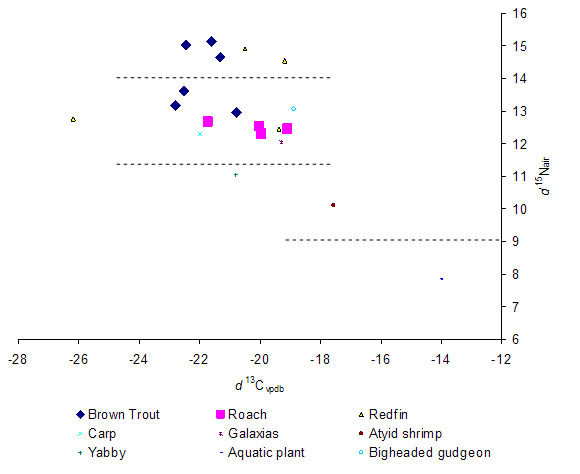 This project set about answering two basic management questions; can the stocking of triploid brown trout provide a new quality trout fishing resource and a measure of control for the roach populations.

We were unable to determine any evidence that roach populations in Lauriston reservoir were likely to be strongly affected by trout predation, as opposed to predation by redfin or other factors, using a combination of stable isotope analyses and fish community surveys.

After two years of surveys it appears that, only one of the originally proposed three annual stockings of triploid trout succeeded and persisted. While it is possible that survivors from this year-class may go on to 'outgrow' their normal diploid counterparts and generate a recreational fishery for larger brown trout; the potential to evaluate this lies beyond the timeline of this project.

Thanks to Daniel Stoessel, Michael Bretherton, Russell Strongman, The department Fisheries Research Branch staff at Snobs Creek who assisted in the fish surveys, to Jeremy Hindell (DSE, ARI) for advice on the isotope analyses and methods, to Jason Tranter from Edith Cowan University for isotope analysis, to William Bravington for assessing the success of triploidy, and to the fish production staff at Snobs Creek for assistance with producing triploids and fin-clipping trout.