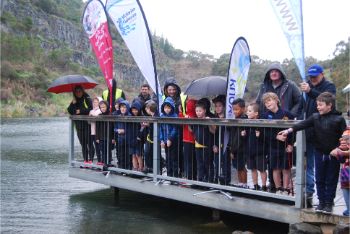 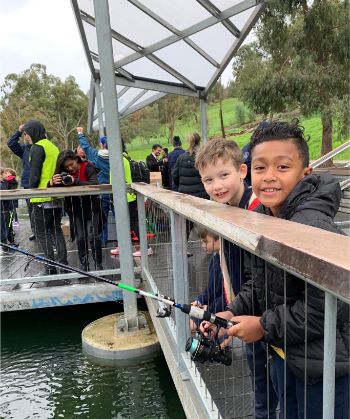 In a Victorian first, Quarry Lake in Ferntree Gully has been stocked in time for it’s opening, with hundreds of rainbow trout, Murray cod and golden perch, thanks to the State Government.

Member for Eastern Metropolitan Shaun Leane said the fish were all catchable size, which delivers on a key commitment of the State Government’s $34 million Target One Million plan to get more people fishing, more often.

An instant fishery is being created today so youngsters and families can come down, cast in a line and have a good chance at landing a fish.

This is the third urban waterway in Melbourne to be stocked with catchable size native fish this year following in the footsteps of Karkarook Lake in March and Casey Fields Lake in April.

Quarry Lake has been rehabilitated as a parkland with open fields and walkways, which provide great access to the 11-metre deep lake.

More rainbow trout will be stocked for the June and September holidays, consistent with dozens of other Family Fishing Lakes across Melbourne that provide fishing opportunities close to population centres for the school holidays.

Australian bass fingerlings will be released in December when they become seasonally available from the hatchery. They will take three to four years to reach catchable size but have proved a worthy addition to other small waters further east in Gippsland where they’ve delivered high catch rates for freshwater anglers.

The stocking mix of trout and native fish will provide year-round fishing opportunities with the cooler months better suited to trout and summertime better for native fish.

Other Melbourne waters to be stocked with catchable size native fish over the next 12 months include lakes Rowville, Lilydale, Navan Park, Roxburgh Park and Melton Reservoir.

“The Knox Shire and local angling clubs are to be congratulated on their hard work and should be proud of giving Ferntree Gully such a magnificent natural asset.”

“This is all part of our plan to get more people fishing, more often and will mean families and die-hard anglers can get out and cast a line in more places across Victoria.”