Operations Quantum was the primary focus operation for this quarter and resulted in the successful investigation into a crime syndicate involved in taking abalone, rock lobster and other molluscs from coastal waters and transporting them to Melbourne to sell on the black market. Operation Quantum was a joint operation with Victoria Police involving 75 DEDJTR officers and months of planning.

There were a number of successful court prosecutions involving the take of large numbers of abalone:

An offender was convicted and sentenced to 3 months imprisonment, 12 months community correction order, 100 hours community work and a 10 year ban on catching abalone for being in possession of 312 shucked abalone, with a search warrant locating a further 208 shucked abalone at his residence.

An offender with a significant history with Fisheries Victoria was convicted and sentenced to 4 months imprisonment wholly suspended for the maximum period of 2 years. He was prohibited from catching further abalone for 10 years and received a $2000 fine and costs for the taking of undersized abalone.

An offender was fined $1200 without conviction and was given a 12 month ban from undertaking recreational fishing for taking 37 snapper and concealing 21 that were undersized. Priority  – Ensure the accuracy of catch and effort reporting in commercial licence and permit holders, and detect and prevent quota fraud

A commercial fisher was successfully prosecuted for falsifying catch and effort returns in an attempt to obstruct an investigation by fisheries officers into fish retailer who laundered recreationally caught fish for sale (see first prosecution outcome in Priority 1). 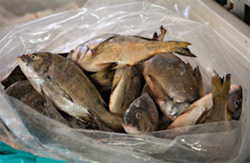 Operation Accolade continued with the inspection of Southern Bluefin Tuna anglers in Warrnambool and Portland.

Targeting of the Intertidal zone through September in the Barwon South West region led to a massive increase in the detection of offenders collecting abalone and other molluscs.

One offender was placed on a community order with no conviction for taking bait (yabbies) for sale without a licence.

An offender was found guilty and with conviction and was sentenced to a penalty of $2450 for taking 55 abalone (51 undersize) and 20 sea urchins from the intertidal zone in Port Phillip Bay.

There were a number of successful court prosecutions relating to taking abalone from the Port Phillip Bay intertidal zone: During Q1, the Fisheries Victoria community and schools education program achieved the following:

Fisheries officers also attended a number of events during Q1:

Similarly, weekends and public holidays account for a majority of offences committed. It is important, therefore, that education and enforcement resources are adequately deployed during these peak times. Fisheries Victoria aims to ensure that at least 25% of an officer's duty time is rostered outside of business hours.

In Quarter 1, Fisheries Officers worked 1219 shifts outside normal business hours which equates to approximately 19.36% of an officer's time.  This is slightly down on the target of 25% due to current fisheries officer vacancies.

One offender was fined $750 and was forced to forfeit $1000 of fishing equipment for attempting to take fish from a Marine National Park.