OPERATION VIPER This was a joint agency investigation with the Victoria Police and interstate fisheries agencies regarding suspected interstate trafficking of commercial quantities of abalone and drugs.

INITIATIVES:The online version of the  "Buy Safe and Legal Seafood" pamphlet was updated and hard copies of the pamphlet are being distributed.

13FISH messages are now integrated into all of the Fisheries Education activities with community groups and Schools. The 13FISH reporting line was promoted to 4033 students and 1881 members of the public who came through the Marine and Freshwater Discovery Centre in Q1.

Fisheries Officers attended and presented at the 4x4 Melbourne Show.

Offenders were caught with 336 abalone in 6 bags divided between 2 vehicles. One offender was convicted and fined $3,000 for possessing a commercial quantity of abalone, taking abalone in a closed season and taking undersized abalone. After being weighed and measured, all of the abalone were returned to the water.  All diving and associated equipment was forfeited.Four offenders were convicted and fined for trafficking in a commercial quantity of abalone, for taking more than twice the catch limit for abalone and for giving false and misleading information. The offenders harvested abalone from Victorian waters within their recreational catch limit per trip and accumulated these abalone at their residences. The four were fined $5000, $4000, $5000 and $2500 respectively and all property seized was forfeited, except for the cars of 2 of the offenders. They were also ordered to pay costs and compensation for abalone destroyed and they each received an order prohibiting them from further recreational fishing from 12 months to 5 years

The education program has continued, targeting commercial fishers to ensure they know how to properly complete their catch and effort returns.

Operation Outreach visited schools in Shepparton, Bendigo, Morwell and Traralgon from 7 May to 20 September 2013.

COURT PROSECUTION OUTCOMES One offender was  convicted and charged for exceed the catch limit for salmonids and for using trout ova as a bait or berley and for aggravated littering. He was fined $2500 and all seized fishing gear was forfeited and destroyed.

Another offender was charged with similar offences – exceeding the catch limit for salmonids, using trout ova as a bait or berley and aggravated littering. He was found to be in possession of 30 fresh Rainbow trout of various lengths, which was six times the daily bag limit of five trout.  He was fined $2500.

An offender was found taking abalone from the intertidal zone, possessing undersized wrasse and obstructing and authorised officer.

Three offenders were convicted for taking more than twice the catch limit of abalone, hindering an officer and giving false and misleading information. They were fined $2000, $3000 and $3000 respectively and all equipment was forfeited. The main offender had his vehicle forfeited and was prohibited from taking abalone for 10 years.

An offender was convicted and sentenced to a 2 month term of imprisonment and fined $2500 for taking more than twice the catch limit, taking during a closed season, taking undersized abalone, failing to carry an abalone measure, using a tool other than an abalone tool and taking marine invertebrates from the Port phillip bay intertidal zone. 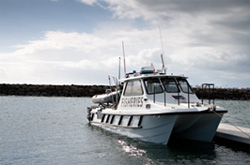 Similarly, weekends and public holidays account for a majority of offences committed. It is important, therefore, that education and enforcement resources are adequately deployed during these peak times.

In Quarter 1, officers worked a total of 1255 shifts outside normal hours (equating to approximately 20% of an officer's time). In Quarter 1, fisheries officers conducted 36 boat based patrols and 160 land based patrols in Marine National Parks and Sanctuaries