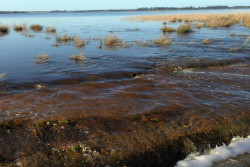 Excellent rainfall in spring 2016 significantly improved water levels in several Victorian lakes and reservoirs, which have since been stocked.

In October 2016, fisheries managers met with anglers and local Fisheries Officers at Ballarat to fine tune plans for 'drought recovery' fish stockings, which are summarised below: These fish stockings were in addition to substantial trout releases through winter 2016.

All of the trout in the table were released before Christmas 2016.

Trout were sourced from The Victorian Fisheries Authority's hatchery at Snobs Creek, near Eildon, while others will be purchased from private hatcheries still holding 'late season' stock.

Increasing fish stocking is a key commitment of the State Government's Target One Million plan for recreational fishing, which aims to get more people fishing, more often.

Fish stocking is also supported by funds raised through the sale of recreational fishing licences.

With the transfer of up to 10mg of water from Rocklands Reservoir to Lake Toolondo, The Victorian Fisheries Authority released 5000 rainbow trout yearlings and 2000 brown trout in October.