This project has improved fishing opportunities for native fish such as Murray cod and golden perch, through northern Victoria.

The three year project was funded by your recreational fishing licence fees and the State Government's $16 million Recreational Fishing Initiative.

The project improved freshwater access, for boating anglers and those casting a line from the shore, within the Campaspe, Loddon and Gunbower systems. 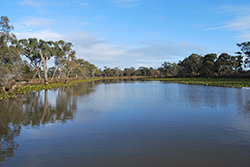 * Lake Eppalock was added to the scope of the project in 2013 and thus did not receive extra native fish in 2012.